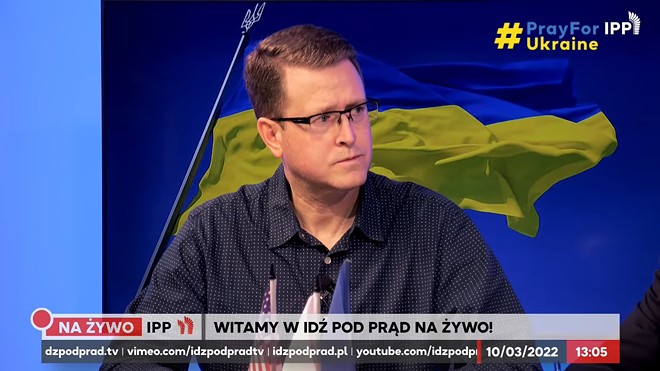 Matt Shea on “Against the Tide,” a Polish TV show produced by far-right Polish pastor Paweł Chojecki, of New Covenant Church in Lublin.

A little over a week ago, the Inlander started digging into reports that former state Rep. Matt Shea and a group of other Spokane residents had gone to Ukraine to help rescue 62 or 63 — accounts are inconsistent — orphans.

In one sense, it made perfect sense: Matt Shea’s wife is Ukrainian. Shea hates Russia. Shea, an Army veteran, is happy to insert himself into tense, even violent situations. That’s one reason Shea was accused of domestic terrorism by an independent investigator — he’d inserted himself in the Malheur National Wildlife Refuge standoff, allegedly even helping to plan it.

But former Spokane Valley City Councilman Mike Munch, who accompanied Shea on his venture into Ukraine, says there was an even deeper reason why Shea was willing to venture into a war-torn country to rescue the orphans. Some of them were, potentially, going to be his daughters and sons.

“Matt had been working on adopting four of the children, for close to years now,” Munch says.  “They basically had everything done, except for the final stamp from the Ukrainian government.”

Munch says Shea hadn’t yet met the kids personally, but had been communicating with them for a long time.

“They had been Zooming and FaceTiming for almost two years,” Munch says.

But then the war hit, Munch says. The trip to Ukraine to make sure those orphans were safe made perfect sense.

“I have a special place in my heart for widows and orphans,” Munch says. “It’s not some great conspiracy.”

The trip to Ukraine wasn’t intended to be particularly elaborate — they only needed to venture about 100 kilometers, across the Polish border, meet the orphans at a train station, and bring them back.

“It should have only been a 4-hour trip from Poland, but it ended up being a 24-hour ordeal,” Munch says. He recalls being stuck at the Polish border for hours and hours when they returned with the children, as those fleeing their home country tried to cross as well.

“It was the most heartbreaking thing I’ve ever seen to be sitting at the border waiting to cross and then seeing all those families with only a suitcase,” Munch says.

But Shea’s presence, far from being universally adored, had become its own kind of national controversy in Poland, with some Ukrainian social media accounts and media outlet headlines speculating wildly about “human trafficking” and orphans being sold.

Munch says an aide to the mayor’s office, “for whatever reason, decided something was fishy,” and called the cops on their group twice.

“We’re not trying to do anything shady, so the Polish government was more than satisfied” after checking out their story, Munch says.

Some of the press coverage, he said, cracked him up.

“We’re not trying to bring the kids back for ‘Biblical warfare’ training,” Munch says.

But plenty of questions loomed.

When the Seattle Times dug into the “Loving Homes and Families for Orphans” organization, which Shea had portrayed to the Polish government as an agency facilitating adoptions, they couldn’t find any evidence that Loving Homes and Families for Orphans was actually licensed for adoptions. A broken website, shifting incorporation documents, and Shea’s defiant attitude didn’t help matters.

When the Inlander went behind the code of the broken website, it was clear that Loving Homes and Families for Orphans wasn’t actually an adoption agency at all. It was a hosting organization, a little like Kids Save. Orphans fly in from foreign countries, get to know potential adoptive parents, and then fly back home — a little bit like having a foreign exchange student. As Munch confirmed, if the host families wanted to adopt the children, however, they wouldn’t actually do that through Loving Homes and Families —  they’d have to go through an actual adoption agency, and conduct an arduous process that can take months, even years. According to Munch, about a third of the orphans were in some stage of that formal adoption process.

But there’s another reason why Shea’s actions may have been greeted with skepticism from the Polish authorities. One of the people coordinating the orphan rescue operation on the Polish side of the border was the lightning-rod pastor Paweł Chojecki, of New Covenant Church in Lublin.

“We met with him a couple of times,” Munch says. “Their church was instrumental in setting up all the stuff on the Polish side.”

“You’re a hero in America,” Shea told Chojecki at an event in Poland this month. “We’ve been following you for a long time.”

Shea and Chojecki met in person in 2018, at the 60th Anniversary of the far-right John Birch Society, an organization that, even in the 1960s, was considered unacceptably fringe.

On Thursday last week, we hopped on a Zoom call with Rafal Pankowski, a researcher and writer at a Polish organization tracking extremists called “Never Again.” And, yeah, he knew the name Paweł Chojecki quite well.

“He’s been on our radar for some time,” Pankowski says. “He is a leader of the group in Poland that stands out. It’s just so different from all the other groups on the far-right in Poland.”

In many ways, he’s closer to Shea’s brand of Christian Nationalism — infused with conspiracy theories and a perpetual sense of victimization — than he is to the anti-Semitic or radically Catholic sort who populate many other far-right groups in Poland.

“Poor children,” Pankowski says of the children who Shea and Chojecki brought into Poland.

He means that in two ways.

“I pity the children for what happens in Ukraine but I would also pity them if they fall into the hands of a sect,” Pankowski says. “It is a kind of sect we’re talking about.”

Start with a particularly distinctive element of far-right extremism in Poland: religion.

Much of the Polish far-right is, Pankowski says, “super hardline Roman Catholic, to the point where they reject the authority of the Pope because the Pope is not Catholic enough.”

Others, he says, are pagan or atheists, rejecting Christianity because they see it as too Jewish.

But Chojecki, the pastor working with Shea to bring the orphans to Poland? He’s the only Polish far-right group that doesn’t fit into either of those categories. He’s evangelical. And he really, really, hates Catholics.

Never Again tallied a slew of examples in their 2020 report, “The Virus of Hate” That year Chojecki accused Pope Francis of worshipping “pagan gods,” and being both a “spiritual crook,” and “a heathen who celebrates Maoist Leninist rituals together with the communist comrades from China.”

The pandemic, Pankowski says, gave Chojecki a boost to his visibility. Chojecki had long been a conspiracy theorist, particularly when it came to the 2010 airplane crash that had killed Poland’s president.

But when COVID hit, his contempt for China found a natural outlet: COVID wasn’t from a Wuhan wet market or an accidental lab leak — it was an intentional Chinese plot, he thought.

“Communist China with all globalist saboteurs, the so-called leftists around the world, have perfectly prepared themselves for the biological weapon,” Chojecki said.

And the communists, of course, had infiltrated every level of Polish society.

“Wherever you look – whether at the Health Organization or at the Polish military academy, there are communist spies everywhere,” Chojecki said in 2020.

“They said we are just like Pope Francis — we are Chinese communist spies,” Chojecki says.

It’s a play familiar to anyone who’s covered Shea, who tried to argue that mainstream liberal Spokesman-Review columnist Shawn Vestal was a Marxist with ties to the Communist party.

Poland, however, doesn’t have the same free speech protections as the United States.
Just last year, Chojecki was sentenced to 8 months community service and fines equivalent to about $4,725 for making insulting comments about Catholics and the president of Poland. (He was, however, found not guilty of trying to provoke a war with North Korea).

In the eyes of one of Shea’s favorite publications, the John Birch Society-owned New American magazine, Poland had “joined the increasingly despotic regimes of Canada, Australia, New Zealand, and, oh, Communist China, where the persecution of dissenting voices, particularly Christian pastors, is on the rise.”

Almost weekly, Shea goes on his Patriot Radio podcast and talks about how civilization is perpetually on the brink, enemies are everywhere, and only God-fearing Patriots willing to take a stand could stop the collapse of civilization. Chojecki essentially does the same.

“The main activity is on YouTube: They have daily broadcasts for hours and hours,” Pankowski says of Chojecki’s church. “They have some religious content. But my sense is they are more interested in politics than the spiritual stuff.”

Kowalksi, a skinhead right down to the skin of his head, had become known for organizing large far-right marches on November 11th, the Polish day of independence. In a poster for the party, Kowalksi holds a gun while Chojecki holds a Bible, and the text touts that the party is “the only anti-Communist and Biblical Party in Poland’s History.” 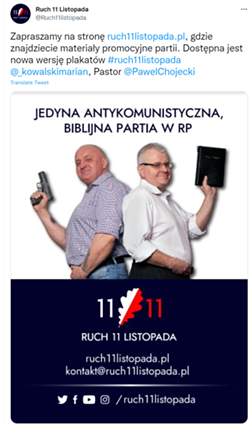 A poster for Pawel Chojecki the 11 November Movement party, “the only anti-Communist and Biblical Party in Poland’s History”

“It’s a very small group, but I think, it’s very rich because of the American connection,” Pankowski says of Chojecki’s allies. “They got a lot of cooperation with the Trump/Bannon crowd in the U.S.”

And, just like Shea, Chojecki’s group was passionately opposed to most refugees resettling in their country. At least a certain type of refugee.

“They are very extremely anti-Muslim,” Pankowski says. “Which means they are very strongly anti-refugee. As long as the refugees are Muslim, they would not accept any refugees.”

But most Ukrainian refugees, of course, aren’t Muslim.

For Shea, Ukrainian children are worth venturing into the war zone to save. When it comes to Syrian children? Shea is happy to smear them as knife-wielding rapists.

So, is Shea a hero for going into a war zone to rescue orphans? Or is he, like Chojecki, a right-wing extremist who has inflamed hatred on both sides of the Atlantic.

First, it isn’t quite clear how Shea’s presence actually helped the orphans. He wasn’t the one coordinating the trip on the Polish side of the border nor the Ukrainian side. He wasn’t the one driving the bus. He wasn’t the orphans’ guardian — though he wanted to adopt four of them. If anything, his leadership style — which reportedly involved refusing to give his last name to Polish authorities — and his reputation harmed their efforts.

Indeed, Shea claims that the suspicions and rumors about his efforts made another orphanage tell them they didn’t want his help.

“They’d rather risk Russian bombs in Ukraine than be a tool in Russian propaganda here in Poland,” Shea said on a recent interview segment with Chojecki on Against the Tide YouTube channel.

But second, people are complicated. Heroes can do bad things. Extremists can do good things. In some ways, the tension reminds Pankowski of Jan Dobraczynski, a famously anti-Semitic writer in the 1930s.

“But during the Holocaust he was really heroic in saving Jewish children and hiding them in Catholic Church institutions,” Pankowski says.

After the war, Dobraczynski was asked to explain the seeming contradiction.

“He said, ‘No, no, no, there is no paradox there, My ideology has always been the same. Because what we did with those kids, we baptize them.'”

“He was definitely a hero in obvious ways,”  Pankowski says. “But he didn’t really like Jews at all at the end of the day. He wanted to turn Jewish children into Polish Catholics.”