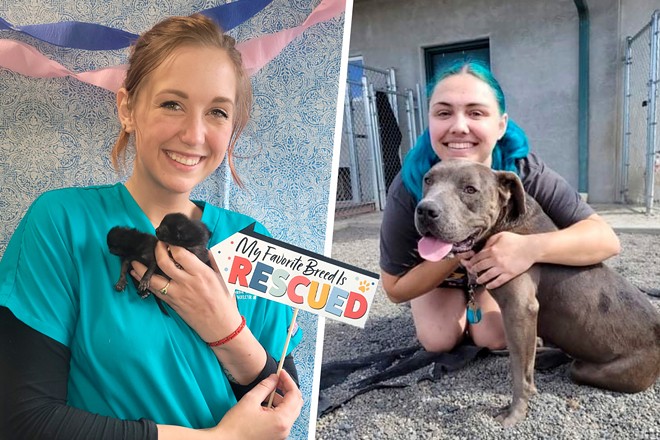 As of this week, due to the resignation of nearly the entire staff, the only animals remaining at the Whitman County Humane Society’s AnimalHaven shelter in Pullman were a few stray dogs going through the legal wait time to be picked up by their owner before being adopted out to someone else. Over the past two weeks, every other cat, exotic pet or dog was either transferred to another animal rescue in the region or adopted into the community.

The near total closure was sparked on July 25, during the monthly meeting of the society’s volunteer board of directors. Annie Lindsey, the shelter’s director, as well as Zoë Skiadopoulou, the shelter’s training enrichment coordinator and interim foster care director, told the board they were resigning by Aug. 8, along with three part-time employees and an intern whose time was wrapping up. That leaves just one staff member, who has been out on medical leave.

In an open letter accompanying a community petition, Lindsey and Skiadopoulou outlined issues between the board and the staff.

“There are severe issues with overtime allotment and the lack of understanding that working overtime is not a choice in our field, but a must,” the letter states. “Animals do not live on a human schedule so when an emergency comes up after we humans reach 40-hours in a work week, we either let the animals suffer or we provide the needed care whether we are paid or not. What choice do you think that we, as caring animal professionals, have been making?”

The petition calls on the board to resign and allow people who are dues-paying members of the nonprofit organization to form a new board. While the society’s bylaws (updated in January 2022) no longer require board members to pay dues, dozens in the community have signed the petition.

Some of the eight board members said they were completely shocked by the resignations.

“They didn’t give us any warning,” says Dr. Nicky Finch, a veterinarian who serves as the medical director for the shelter, a permanent board position. “We would get emails about overtime or something going on, but I can’t remember us ever saying no to overtime for anything that was an emergency situation.”

But Lindsey and Skiadopoulou tell the Inlander they feel there’s been a lack of clear communication and respect for the staff. With a policy that overtime be requested via email and approved by board members, the two say they would often send those requests, but may not hear back for days.

“By definition, the need for overtime presents on an emergency basis,” their letter states. “Requiring overtime to be requested ahead of an emergency is illogical and results in the staff having to make choices nobody should have to make: work as unpaid volunteers or watch animals suffer?”

Finch says the staff left the meeting before the board could ask them any questions or try to have a conversation about the situation.

But Lindsey and Skiadopoulou say they told the board they’d be happy to answer any questions by email.

TOO MUCH WORK, NOT ENOUGH HOURS

In general, there has been a breakdown in communication between the staff, the board and the public over the last few years. Between the pandemic, multiple changes in board membership and high staff turnover, issues arose.

No board meeting minutes are posted on the society’s website, and despite calls from the public to post the recording of the July meeting, the board has so far declined to do so.

Lindsey says few, if any, emails to dues-paying society members have been sent out over the past two years, and no email was sent explaining what is currently going on.

While overtime was sometimes approved, she says it was regularly denied. Some board members asked why part-time staffers couldn’t take on more work to reduce the need for Lindsey and Skiadopoulou to go over 40 hours.

“The kind of issue with that, that we’ve explained multiple times and just been completely ignored on, is that [for] our part-time staff, this is not their full-time responsibility,” Lindsey says. “They have school, they have other jobs, they have other commitments, they are part-time employees, and they work as much as they can for us.”

Lindsey and Skiadopoulou were the most experienced employees on staff, with just about three years each working for the shelter.

When reaching the end of their weekly 40 hours, if they still needed to take animals out for exercise or provide medical attention or food, the two say they felt they had to choose between clocking off and finishing those tasks, or leaving the animals without their needs met.

“It got to the point where we were working up to 20 or 30 hours off the clock because it simply wasn’t approved,” Lindsey says. “And nobody would respond to crisis emails of ‘Hey, this really big thing happened. We just got 25 cats in today, we need extra hours to make sure that their care is fit for the night.’ And it would get denied.”

Some board members disagree that overtime has regularly been denied and say they volunteer to help in emergency situations.

Finch, in a written statement, tells the Inlander, “They did not give the board any warning, nor did they communicate intentions to resign or the need for anything aside from more overtime, which we could not provide them at this time, though we had approved overtime many times over the previous year, both for emergencies as well as non-emergent situations.”

The shelter needs to raise about $90,000 through the end of the year in order to break even with its budget, according to the board and the staff.

Jeff DeBoer, who joined the board in June, shortly before the resignations, and who volunteered to help with technology at the shelter over the last couple of years, says that overtime was regularly approved.

“We’re trying to figure out how to work within the budget and still be able to do this,” DeBoer says. “The overtime thing was difficult.”

In his short time on the board, DeBoer did deny an overtime request to assess stray cats in Albion. Rather than spend staff time to do that, DeBoer says he and another board member volunteered to check it out instead.

Skiadopoulou says that in addition to having multiple emailed conversations about the pressures on staff members, she emailed board member Dayna Cooper a week before the resignations, urging the board to take staff concerns seriously.

“Our staff is hanging on in order to continue saving homeless lives, but I can personally attest to the fact that many of us are at the end of the line,” Skiadopoulou wrote to Cooper on July 14. “The [board] faces a great risk of losing many of its staff, two of which being the only staff members fully up to speed on how to fully operate this shelter in terms of medical protocols, community resources, etc.”

Cooper declined to be interviewed, but in a written statement says the issues may be related to problems with an ex-board member. Cooper writes that a former member (who she declined to identify) was bullying other board members and resigned when confronted. Staff, she writes, likely didn’t know about the issue, and liked that board member. (Staff said their resignations stemmed from compensation/respect issues.)

“I couldn’t help but to feel that if I wouldn’t have confronted the bully, [staff] would have given this newly elected executive committee a chance,” Cooper writes. “From then, it has been pure hell for all involved.”

The shelter can typically hold about 10 dogs at a time if they need to be put in separate cages, or slightly more if two dogs can be housed in a cage together, Finch explains. For cats, she says, there are two large enclosures that can hold between about three and six cats each, plus about 20 individual cat cages, which at times can hold litters.

Before leaving, staff members reached out to more than 100 animal rescues throughout the Pacific Northwest and successfully moved all the remaining animals except for strays. By law, stray dogs that are brought in must stay for a set amount of time to allow owners to reach out before the animal is sterilized and listed for adoption, Finch says.

The Humane Society of the Palouse in Moscow won’t be taking animals from Whitman County, but has offered some of its Latah County services to Whitman residents while the Pullman shelter hires new staff. Those services include spay and neuter assistance ($50 toward a spay or $30 toward a neuter at a regional vet), reduced price microchips (usually $30, now $15), and reduced cost engraved name tags (usually $8, they’ll be $4), says Sierah Beeler, director of that shelter.

The Whitman County Humane Society board is already looking at applications for new staff members. AnimalHaven shelter serves all of Whitman County’s nearly 50,000 residents, including in Pullman, Colfax and Albion. Other work, such as deep cleaning that can’t be done with animals present, is likely to be completed while the shelter is closed.

It’s unclear if any legal action is likely. Pullman police were called to the shelter on July 31 when a burglar alarm was triggered. They found three board members in the facility, and no charges were filed as they were allowed to be there, according to police. There are no active police investigations into the current situation.

The board is speaking with an attorney and may investigate claims of the misuse of funding, though some board members and staff appeared confused about what those allegations referenced.