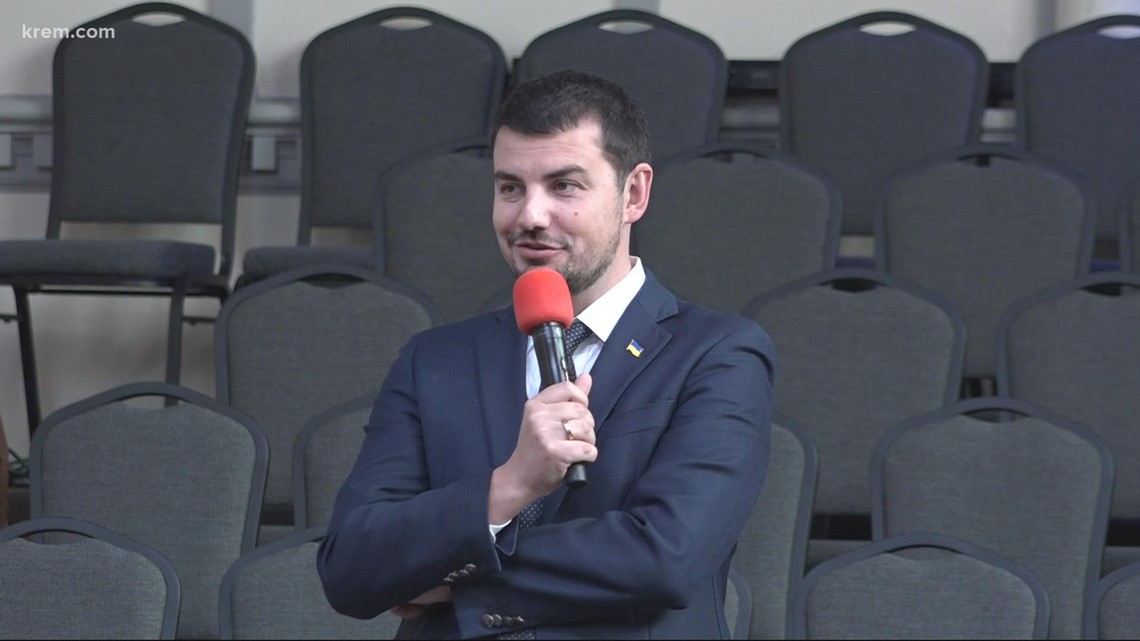 Dmytro Kushneruk visited the Pilgrim Slavic Baptist church in Spokane to speak to the community about helping and preparing for Ukrainian refugees.

SPOKANE, Wash. — Members of the Ukrainian community, supporters and former refugees filled the pews at Pilgrim Slavic Baptist church to hear from the Consul General of Ukraine in San Francisco, Dmytro Kushneruk.

Spokane was the Consul General’s third stop in Washington. He has been going to different communities to share information from the Ukrainian government and how people can help and prepare for refugees fleeing Ukraine.

He said he’s seen an outpour of support.

“This is a very good example of when you can really help people who you don’t know,” Consul General Kushneruk said. “Sometimes, it’s not their friends or families that need help but there’s families who need help so then people help.”

Sitting in the front row was Spokane resident Geno Pikulik. Pikulik has lived in Spokane for 27 years. Before that, he lived in Ukraine, but religious persecution in the 1980s pushed him out.

“I got on a 13 hour flight to Seattle and then Spokane and this has been my home ever since,” Pikulik said.

Pikulik said watching Ukrainian refugees flee from the country in the midst of war now, reminds him of what he ran from back in 1995.

“Today’s refugees fleeing from the war in Ukraine are facing many, many problems on the way,” Pikulik said. “They’re the exact same problems I faced 27 years ago. So it’s dear to my heart to just drop things I was doing and start helping refugees. I just feel like it’s my duty now.”

In response to Ukraine refugees being displaced by the war, Pikulik said he displaced himself to accommodate a Ukrainian refugee family of four.

“I actually moved away from my place, where I lived,” Pikulik said. “So, I rented a different place and housed refugees in a place where I lived. So a family of four moved in to my place. So, that’s the least I could do.”

In the last two months since the start of the war, Pikulik said he’s seen 12 Ukrainian families come to Spokane.

Pikulik said for people who don’t know where to start helping, people can donate clothes to Ukraine Closet or money to Spokane Slavic Association.

Pikulik also encourages people to write-in to their local government officials to call on the federal government to make the immigration process easier for refugees.

According to Homeland Security, if applicants meet program qualifications, the process could allow Ukrainian citizens and their immediate family members to come and stay in the States for up to two years.