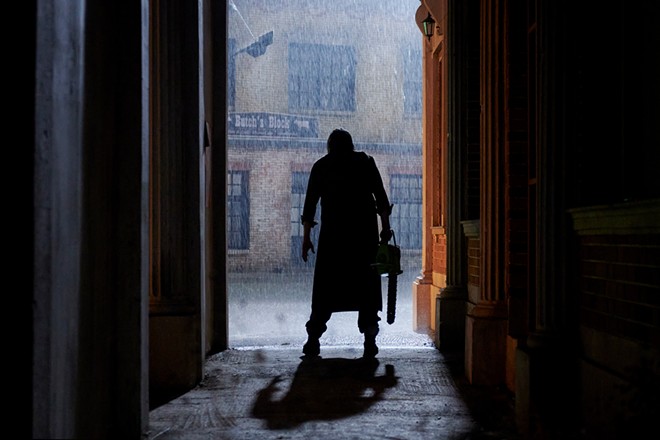 In 1974, horror cinema as the world knew it was torn to pieces and reborn into something new with the release of Tobe Hooper’s The Texas Chainsaw Massacre. One of the most influential films of its kind, its legacy reverberates to this day. It gave birth to a whole new kind of slasher.

The original Chainsaw tells the tale of a group of friends driving through rural Texas who stumble upon what seems to be a deserted house that ends up containing something far more sinister: Leatherface.

A man who wears the skin of those he kills as his own and wields a chainsaw as his weapon of choice, he quickly carved out his place as a horror icon for the ages. Made with a limited budget that utilized only a minute amount of actual gore, the film endures because of how every detail, from the precise sound design to the striking visuals, is finely tuned to create abject terror.

Now, nearly 50 years since the original scared audiences, a new film is attempting to follow in its bloody, plodding footsteps. Simply titled Texas Chainsaw Massacre, dropping the all-important The, it arrives on Netflix Friday, Feb. 18, and is a direct sequel to the original set 50 years later. However, it is by no means the first sequel in what has been a long-running and mixed bag of films.

Not including this newest entry, there have been an astounding seven Chainsaw sequels of largely declining quality. The first, 1986’s The Texas Chainsaw Massacre 2, is the one most worth seeing, primarily because it was the only sequel directed by the late Hooper himself. It has gained a cult following, and it is easy to see why as the director took the film in what was an undeniably new direction that saw him poking fun at his prior work. While not quite a spoof, it utilizes similar storylines and visual references that then become something new when blown up into absurdity.

Unfortunately, there are oh so many other sequels that lacked this vision. I’ve seen them all, though it is hard to recommend them to anyone else.

To finish out the original storyline, there was 1990’s Leatherface: The Texas Chainsaw Massacre III and then 1995’s Texas Chainsaw Massacre: The Next Generation. The former is an uncertain, roam-around-the-woods-type movie that never finds its footing. The Next Generation is a deeply flawed film though it is admirable for how chaotic it gets in its finale.

Then there is 2013’s Texas Chainsaw 3D, which tries to be a redemptive reimagining of the story. That was followed by 2017’s Leatherface, a prequel to both the original and Texas Chainsaw 3D.

All of these follow-up films have muddled and stretched the story in a host of ways that have threatened to tarnish just how remarkable the original was. Yet they haven’t, which is a testament to just how much that first film endures as a horror masterpiece.

This brings us back to the newest film. It is hard to imagine it will be as bad as some of the lowest points of the series. One hopes it will be like the newest Scream and surprise us in how it complements all that came before. One fears it will be like the abysmal Halloween Kills that only succeeded at killing off an interest in any more sequels in that story. Based on what we have seen thus far, you must unfortunately be prepared for the latter.

However it ends up, we can always find solace in returning to the magnificence of the original. After all, the prevailing impact of The Texas Chainsaw Massacre is that it can still remain such an incredible piece of horror filmmaking no matter how many sequels try and fail to live up to its legacy. ♦