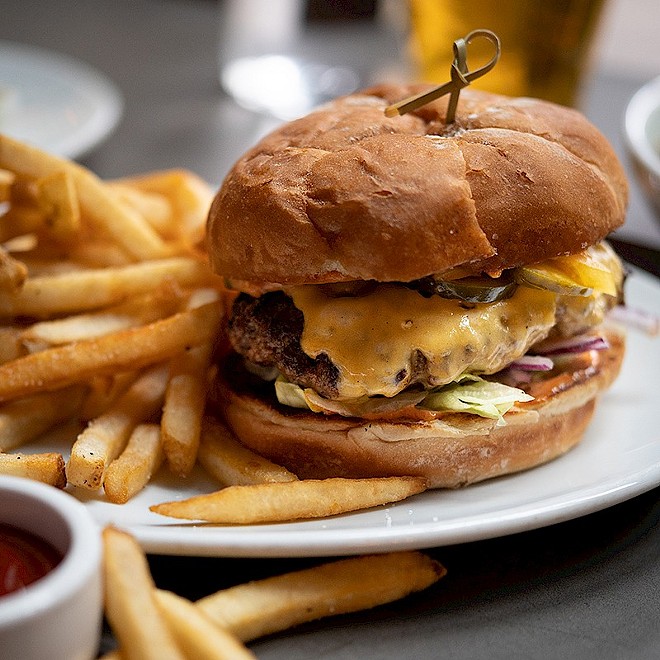 FROM PASTA TO PATTIES

As of this week, the Ethan Stowell Restaurants-operated eatery inside the Wonder Building has a new name and concept. The former home of Bosco Pasta & Panini is now Victory Burger.

Described as serving “chef-driven prime beef burgers,” the casual, walk-up spot is a spinoff of the Seattle-based restaurant group’s the Victor Tavern. The company also operates Tavolàta in downtown Spokane, which opened in mid-2021.

“The namesake Victory Burger has been such a crowd favorite that we decided to build an entire casual counter service concept around this upscale take on a fast food burger,” says a press release announcing the change.

“We wanted to take everything that was great about a casual quick-service hamburger but then create it in a chef’s kitchen utilizing high quality Northwest ingredients. The service style and variety of beverage options including cocktails, beer and wine will be familiar to anyone that has joined us at Bosco over the last year, but we believe that this new family-friendly menu is going to be a big hit with families, event goers or any of our neighbors who love a great burger in a fun and lively atmosphere.”

Burgers at Victory range from $10 to $16 each, and include creations like the Base Model ($10, American cheese and Victory sauce), the Bulldog ($14, mushrooms, bacon, Swiss, dijonnaise) and the Veg Head ($12, Beyond patty, aged cheddar, pickled peppers, lettuce, tomato, guacamole).

All burgers are served on sourdough buns and with a side of dill pickle fries, and options to swap in a salad for fries ($1), a vegan Beyond patty ($2), or to add bacon ($2).

Victory Burger also has a kids menu ($7-$9), house-made ice cream sandwiches ($8) for dessert and sides of salads or fries ($5-$8) that can be ordered separately.

“We’ve loved making a home in Spokane and the Wonder Building and we’ve come to embrace how fully sports-driven this location is,” says chef-owner Ethan Stowell. “So, we’re excited to launch this new concept, aimed fully at celebrating hometown sporting teams and fans.”

The collaboration has yielded five spice blends, such as the Where’s the Lamb Sauce? — a “herbaceous blend filled with mint, tarragon, chives, rosemary, oregano, marjoram and parsley, and finished with sweet balsamic powder and molasses” — and Sir Wellington (mustard, mushroom shallot, horseradish, Worcestershire, rosemary and thyme) in individual ($10) and bulk ($26) quantities.

The company, founded in 2013, is known for its innovative, chef-based projects and unique spice blends. Find out more at spiceology.com/collaborations/hells-kitchen.

CHEF CENTRAL
The pandemic shutdown and other factors have continued to impact how we eat, prompting a group of Spokane entrepreneurs to launch BooKoo Chef.

The project includes a website and app-based platform that “pairs private chefs directly with consumers to create one-of-a-kind in-home dining experience,” according to the company’s press materials.

BEER HERE
No-Li Brewhouse Bier Hall (1003 E. Trent Ave.) is in the works? No kidding! Renovations are ongoing at No-Li for a European-style beer hall, which in German would be bier halle.

The 4,200-square foot space (formerly used by Dry Fly Distilling before it moved downtown) adjoins the existing pub and features enough tap handles to accommodate No-Li’s beer, as well as regional guest taps. It’s expected to be operational by May, becoming one more thing to love about this born-and-raised Spokane brewery. Check nolibrewhouse.com and No-Li’s social media channels for updates.

After years of visiting both spots, Todd McCracken bought the Spokane Valley location in March 2020. His fond memories and reverence for the O’Doherty’s tradition gave him pause to change the name, however, until recently. Look for new signage and a very gradual transition from the O’Doherty’s namesake to McCracken’s Irish Pub. Stay tuned at odohertysirishpub.com for details.

The North Idaho distillery recently raked in the awards for its barrel-aged brandy, honey spirits, whiskey and more.

WINNING SPIRIT
Olympic athletes weren’t the only winners bringing home the shiny stuff this year. Idaho’s Up North Distillery (846 N. Boulder Ct., Post Falls) was awarded three medals by the American Distilling Institute for its nationwide competition: a bronze each for its three-year barrel-aged apple brandy and barrel reserve honey spirits, and a silver medal for its North Idaho single malt whiskey. But wait, there’s more.

This year, Sip Awards gave Up North a gold medal for its barrel reserve apple brandy, and the American Craft Spirits Association awarded the distillery a bronze medal for both its cask-strength honey spirits and North Idaho single malt whiskey.

Since opening in 2015, Up North has racked up an impressive array of accolades. Taste these award-winning spirits at Up North Distillery, as well as The Bee’s Knees Whiskey Bar (324 W. Lancaster Rd., Hayden), which is owned and operated by Up North Distillery. More at upnorthdistillery.com

MARKET UPDATE
For the past 35 years, much of the interior shelves, walls and ceiling tiles at Halletts Market & Cafe (14109 E. Sprague Ave.) have been green or purple. No longer.

At the tail end of 2021, staff spent nine days transforming the space to a more contemporary color scheme of black, white and gray, says Cindy Hallett, who opened the business with husband Tom in 1984. Halletts Market & Cafe came about when Tom and his brother, Joel Hallett, split their Halletts Chocolates business. (The Halletts Chocolates and Factory Store at 1419 E. Holyoke Ave. in northeast Spokane has been run by the Kane family since 2004).

In addition to selling a range of gift baskets, Halletts Market & Cafe offers local and regional dried goods, like Good to Know Honey out of Mica, Washington, and a modest wine and beer selection.

To Go Box is the Inlander’s regular dining news column, offering tasty tidbits and updates on the region’s food and drink scene. Send tips and updates to [email protected].