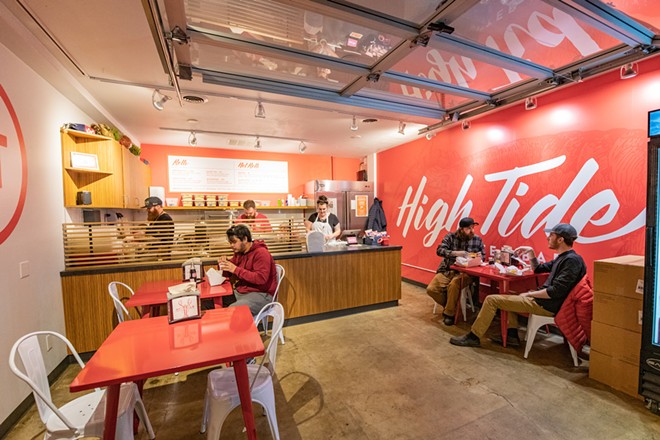 After more than 10 years in midtown Coeur d’Alene, GARNET CAFÉ felt the squeeze of the region’s real estate boom and scrambled to find new digs late in 2021. The breakfast- and lunch-only eatery is trading its cozy (as in really small) home at Third and Walnut for plenty of elbow room in the former Broken Egg diner spot, at 3646 N. Government Way. Visit facebook.com/GarnetCafeCDA for updates.

Were you looking for Kabob House on Ruby? Not only did the restaurant relocate north up the Division Street Hill to the NorthTown Square commercial center (4805 N. Division), the name is now ZULLEE MEDITERRANEAN GRILL, which reflects ownership by a central Washington-based parent company of the same name. Visit facebook.com/Zulleespokane.

No sooner had we published an introduction to MANGIA WOOD FIRE in Coeur d’Alene (2045 Tea Olive Lane) than we discovered it had closed, according to its Facebook page.

“Although saddened that Barnwood will be permanently closing its doors, [we’re] excited to be providing much needed housing to the community,” says Niki Randall, Goodwin Restaurant Group’s chief marketing officer.

MESSY’S BURGERS & GRILL (6248 Maine St., Spirit Lake) closed in January. The grill and its small dining area was attached to an adjacent business, White Horse Saloon, which remains open. Fun fact: The White Horse, listed on the National Register of Historic Places, is one of the oldest continuously operating saloons, dating back to 1907-08. Also in Spirit Lake with a similar name and run by the same fellow, Jesse Keller, MESSY’S BURGERS food trailer remains open.

Chef and restaurateur Chad White announced last week that he’s closed both locations of HIGH TIDE LOBSTER BAR, (835 N. Post St., inside the Wonder Building and 502 W. Riverside Ave., in the Numerica Building skywalk) due to the rising price of lobster. He noted on his personal Facebook page that he plans to “re-concept to a new exciting fast-casual eatery this summer.”

McRUINS (825 N. Monroe) is also now closed, but hopefully not for long.

Chef Travis Tveit, formerly at Iron Goat Brewing Co., and who’d been running the McRuins kitchen, is taking over the Monroe space to open his own concept, CHOWDERHEAD, focusing on the lunch crowd around the courthouse. More details on that have yet to be announced.

Brown, meanwhile, still operates Ruins and Hunt on Riverside and Stella’s Cafe inside the Saranac Commons.

VERSALIA PIZZA has added a second location in Liberty Lake (20760 E. Indiana Ave.) with a slightly scaled back version of its flagship Kendall Yards location’s menu.

Not to be outdone, there are now three locations of RIVER CITY PIZZA: Otis Orchards (4707 N. Harvard Rd.), Spokane Valley (17018 E. Sprague Ave.) and the newest location in Coeur d’Alene (3270 W. Prairie Ave.).  And if it’s numbers you’re interested in, how about the 29 wildly different pizzas you can get there? Visit rivercitypizza.com.