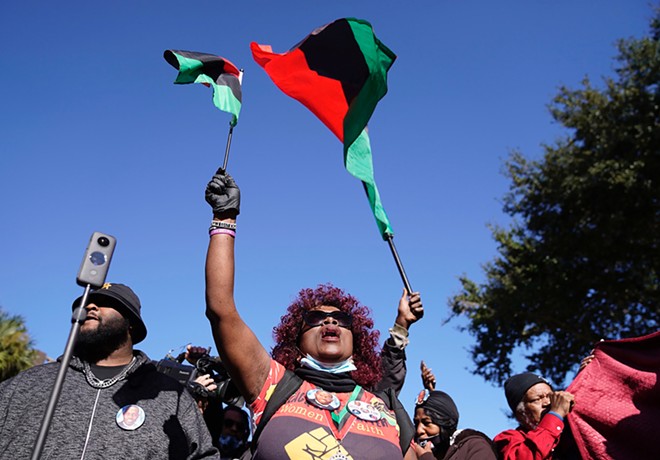 People react outside the Glynn County Courthouse in Brunswick, Ga., on Wednesday, Nov. 24, 2021, after the jury found three men guilty of murder and other charges for the pursuit and fatal shooting of Ahmaud Arbery.

BRUNSWICK, Ga. — Three white men were found guilty of murder and other charges Wednesday for the pursuit and fatal shooting of Ahmaud Arbery, a 25-year-old Black man, in a case that, together with the killing of George Floyd, helped inspire the racial justice protests of last year.

The three defendants — Travis McMichael, 35; his father, Gregory McMichael, 65; and their neighbor William Bryan, 52 — face sentences of up to life in prison for the state crimes. The men have also been indicted on separate federal charges, including hate crimes and attempted kidnapping, and are expected to stand trial in February on those charges.

The verdict suggested that the jury agreed with prosecutors’ arguments that Arbery posed no imminent threat to the men and that the men had no reason to believe he had committed a crime, giving them no legal right to chase him through their suburban neighborhood. “You can’t start it and claim self-defense,” the lead prosecutor argued in her closing statements. “And they started this.”

Though the killing of Arbery in February 2020 did not reach the same level of notoriety as the case of Floyd, the Black man murdered by a white Minneapolis police officer three months later, Arbery’s death helped fuel widespread demonstrations and unrest.

Like many other recent episodes involving the killing of Black people, the confrontation was captured on video that was eventually made public. Unlike many of the others, the video was made not by a bystander but by one of the defendants, Bryan.

From the beginning, Arbery’s family and friends raised questions about local officials’ handling of the case. The three men who were later charged walked free for several weeks after the shooting, and were arrested only after the video was released, a national outcry swelled and the case was taken over by the Georgia Bureau of Investigation.

Over the 10 days of testimony in the trial, prosecutors challenged the idea that an unarmed man who never spoke to his pursuers could be considered much of a threat at all.