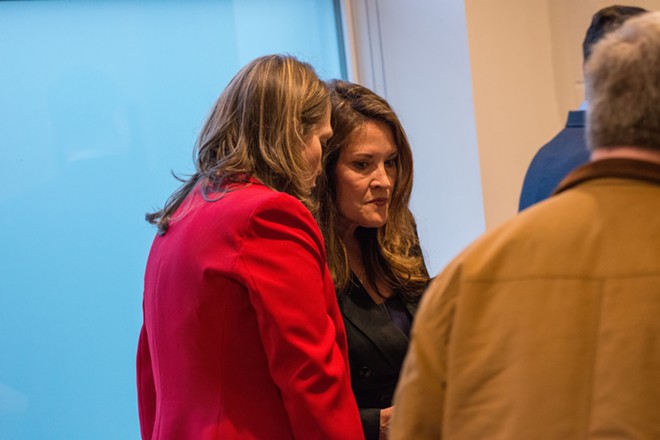 
If Idaho gubernatorial candidate Janice McGeachin upsets the polling and beats Gov. Brad Little in tomorrow’s primary, she’ll almost certainly go on to make history in the deep red state: She’ll be the first female governor of the state of Idaho. Just like she was Idaho’s first female lieutenant governor.

“It’s exciting to think I’m going to be breaking another glass ceiling,” McGeachin tells the Inlander.

In fact, if the far-right slate of McGeachin allies also win, Idaho would have women serving as governor, lieutenant governor (Priscilla Giddings,) and secretary of state (Dorothy Moon). Of course, most of the coverage of these candidates hasn’t been about gender — it’s been about their radical tactics and ideology.

But the fact that so many of the far-right politicians in Idaho are female shows that there’s been a transformation of the Idaho far right, especially within the militia-aligned Patriot Movement that McGeachin rallied behind in 2019.

“There is that larger shift going on within this wing of the far right, in terms of women taking on leadership roles,” says Devin Burghart, who tracks the far right in Idaho with the Institute for Research and Education on Human Rights. “You’re looking at a near 50/50 split, particularly on the anti-vax side of it.”

This week, the Institute for Research and Education on Human Rights released a report indicating that female Idaho state legislators were actually more likely to be members of far-right Facebook groups than men.

Of the 24 Idaho state legislators who were part of these groups, about 42 percent were women, despite women only making up 30 percent of the Legislature.

He notes that about half of the leadership in Ammon Bundy’s “People’s Rights Movement” —
formed as a response to the COVID-19 pandemic — were women.

That’s a marked contrast from the way the far-right militia-aligned movements in Idaho were in the 1990s, particularly among leadership. Back then, he says, even the rank and file were about 85 percent men.

From his view, that started to change around 2010, during the rise of the Tea Party movement, which Burghart estimates were roughly one-third women.

Some of the shift, he says, is a basic cascade of representation. The more that women, all across the political spectrum, run for office, the more other women feel they can do the same.

“They see more women involved,” Burghart says. “And I think that has a tremendous impact.”

But he also believes that the COVID-19 pandemic itself has been a major driver of the change.

“Focusing exclusively on things like gun rights and the Second Amendment is something that has generally been far more attractive to men,” Burghart says. A 2019 NPR/PBS NewsHour/Marist poll concluded that only 28 percent of women believe that protecting gun rights is more important than efforts to control gun violence, compared with over half of men.

But COVID-19 produced a different slew of issue sets.

“When you focus on issues around health and children in schools, for instance, like a lot of COVID denial rhetoric has done, it has more resonance, generally, to issues that have traditionally been issues of concern to women,” Burghart says.

Even before the pandemic hit, far-right female Idaho legislators like Rep. Heather Scott were championing the anti-vaccine rhetoric of groups like Health Freedom Idaho. And today, McGeachin and Giddings have made both COVID — in particular opposition to vaccines — and controversial ideology supposedly being taught in schools into central pieces of their campaigns.

“Under the McGeachin administration, I will end all medical tyranny. Our children will not be forced to wear masks ever,” McGeachin says at an event in Moscow, Idaho, in April. “We will defend your ability and your decision-making authority for your own body.”

That last line is a kind of funhouse mirror version of the arguments that have been used by progressive female politicians like Sen. Patty Murray for decades to defend abortion rights.
McGeachin, by contrast, has called for the governor to call a special session to remove exceptions for rape, incest and the life of the mother from the state’s recently passed abortion ban. (Gallup polling suggests that the gender gap is much narrower on abortion than guns — in 2018 19 percent of both men and women supported outlawing abortion in all circumstances.)

Giddings, meanwhile, accuses her opponent, Scott Bedke, of having received donations from “big pharma and Pfizer.” McGeachin appointed her to an anti-Critical Race Theory task force, where Giddings claims they found “trash in public libraries and in books,” and that people are “digitizing it and providing it to every kid across the state.”

That’s not to say that gun rights don’t show up in their campaigns — sign up with your email address on Giddings’ campaign site and win a free AR-15 — but COVID, CRT and controversial library books dominate. (The NRA, it should be noted, endorsed their opponents.)

Women have been leading in the far-right grassroots, too.

A campus-based homeschooling company founder named Amy McCamly fled California to North Idaho because she believed the California governor’s approach to the pandemic, including encouraging childhood vaccinations, was making it “not a safe place for our children,” she told the Coeur d’Alene Press last year.

Indeed, a prominent far-right figure named Lana Lokteff moved to Idaho last year, according to her Twitter account. She’s known for actively trying to recruit women to the alt-right, a swath of the radical right that embraces racism and anti-Semitism.

The Lokteff Telegram account has been involved with organizing protesters to attend a North Idaho College meeting and to oppose the upcoming “Pride in the Park” event.

“When women get involved,” Lokteff declared in 2017, according to Harper’s Magazine, “a movement becomes a serious threat.”

Idaho Lt. Gov. Janice McGeachin has made her objection to masks and vaccines a crucial part of her gubernatorial campaign platform.

This trend isn’t just happening in Idaho: Last year, several McClatchy reporters in California documented how the pandemic had drawn more women into the far-right.

“Women are leaders in every form of community organizing, even within organizing that’s anti-feminist in its ideology,” Kate Bitz, with the anti-extremist Western States Center organization, told McClatchy reporters last year.

“The COVID-denial stuff reminds me of the same kind of impact that the anti-busing efforts had during the 1970s,” Burghart says. “When integration hit the ground and started impacting schools, a lot of the organizing efforts around anti-busing efforts, particularly back East, were led by women.”

Indeed, you sometimes did have prominent women leading key parts of the hardline right. One of the most famous was Phyllis Schlafly, an anti-feminist activist who rallied opposition to the Equal Rights Amendment in the 1970s and disparaged Republican attempts to try to diversify the party as recently as 2012.

Michelle Malkin, a Filipino-American alt-right columnist who has endorsed McGeachin, credited an alliance with Schlafly for providing “a very pivotal moment for me in my young career.”

“Seventeen years ago… I had the privilege of teaming up with the original Godmother of America First, the Catholic author, lawyer, and social conservative, mom of six and grandmother of 16, Phyllis Schlafly,” Malkin said, according to a 2020 Bulwark article.

Malkin has consciously tried to pass the torch of the conservative movement on to the alt-right instead of the traditional Republican Party. At the first White nationalist-aligned America First Political Action Conference, she greeted the crowd of fans of alt-right podcaster Nick Fuentes by declaring, “Mommy’s in the house.” 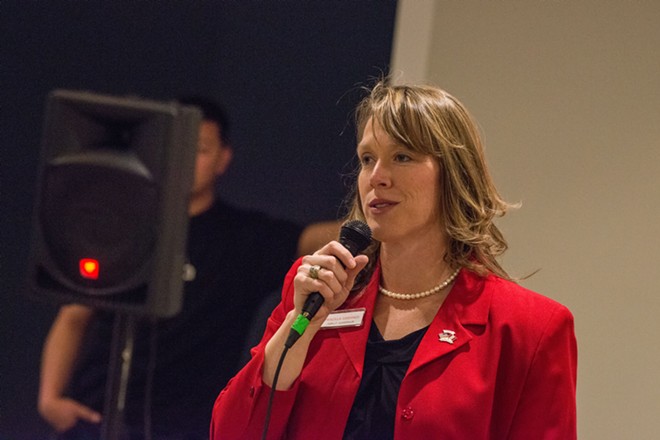 Rep. Priscilla Giddings was censured by the Idaho Legislature for promoting a Redoubt News article that named and shamed a rape victim.

ack when she was a legislator

“Some, because of how she looked, thought she was stupid,” LeFavour says. “I wouldn’t be one of those.”

And running for lieutenant governor in 2018, McGeachin struck a nuanced chord when asked about the #MeToo movement.

“I understand that it’s real – the experience that many women have been through,” McGeachin told Boise State Public Radio in 2018. “I myself have, you know – I’ve had to deal with unwanted attention from men. And I think it’s sad that some women have perhaps experienced even being placed in very devastating situations.”

But she argued that it was crucial for women to not let allow anger to control them.

“We have to learn how to let that go and take that energy and put it into more productive efforts,” McGeachin said. “Maybe that’s what we’re seeing manifested with so many women stepping forward into leadership positions. So I think that’s good; I think that’s positive.”

Yet when a legislative intern shared her own devastating situation — she’d been raped by an Idaho state legislator — some of the women of the Idaho far right, including Giddings and Redoubt News founder Shari Dovale, exposed the victim’s name and scoffed at her claims.

At times, women in the Republican Party, like former House Republican Conference leader Rep. Cathy McMorris Rodgers of Washington state, have tried to soften the image of the GOP. The woman in that position now, Rep. Elise Stefanik, has gone in a different direction, calling Democrats “pedo grifters” and flirting with alt-right tropes.

The incentives are warped: Infamy is a faster path to a national profile for both women and men than being the kind of member of the party who doesn’t make waves. Arguably, Georgia Rep. Marjorie Taylor Greene, who like Malkin and McGeachin, spoke at this year’s alt-right AFPAC conference, has more name recognition today among the general public than McMorris Rodgers ever had.

And if the polling is right, and Little crushes McGeachin in the primary, it’s far more likely that she’ll retain a major fan base than more moderate GOP primary losers.

“Good girl! If she runs, she wins,” Lokteff, the alt-right woman who apparently moved to Idaho, wrote on Twitter in October, praising McGeachin for trying to ban vaccine mandates, “People whining should stay out of Idaho.”