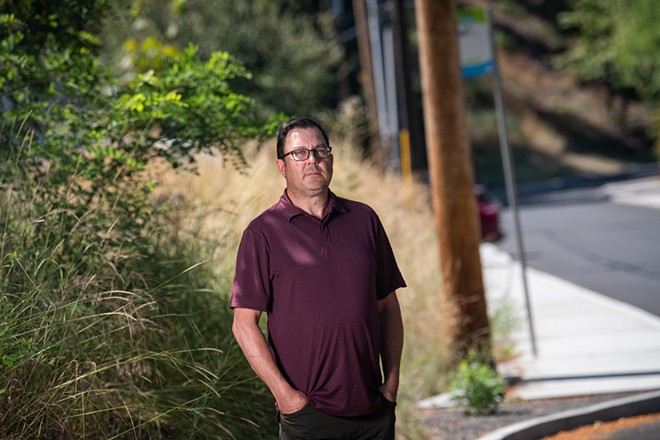 “What it really does is remove barriers to building low-income housing,” says Ben Stuckart, pictured here at a potential Peaceful Valley parcel.

While many nonprofits want to build low-income housing, at times it can be difficult to get things rolling.

For example, when a nonprofit applies for housing project grants from the state or federal government, agencies often want to see that an organization already has the land to build on, says Ben Stuckart, executive director of the Low Income Housing Consortium.

But for nonprofits, buying a piece of land before knowing they’ll get grant money to build there is a huge risk, he says.

A new land bank that Stuckart and others just started in Spokane could help solve that problem by obtaining land and abandoned properties, then working with nonprofits so they can buy those properties over time.

In partnership with STCU, the Low Income Housing Consortium worked to obtain seed money for the Spokane Regional Low Income Housing Land Bank from the GoWest Foundation, which works with credit unions and community organizations in six Western states to help communities with projects such as affordable housing, financial literacy and more.

With $45,000 from GoWest, the new land bank is now up and running, and Stuckart is excited to start collecting donations so the bank can start gathering properties. It’s the first bank of its kind in Washington state.

“I’ve got a goal that the land bank needs to raise $1 million over the next year. That may come from soliciting the city, the county, the state and the feds, and it may come from me talking to businesses about what a great idea it is,” Stuckart says. “But in order to pursue the path where I’m buying land, I’m going to either have to start with a gift of land or I’m going to need some money.”

Already, he’s in talks with multiple property owners who may be interested in selling their land at a discount to the land bank with the knowledge it will be used for low-income housing; other proposed changes to state law could help the land bank even more in the future.

In 2018, Washington’s Legislature changed state law so that state agencies with surplus land can gift that land to organizations that will use it for the public good by providing affordable housing.

Before, it was illegal for agencies to gift public property at low or no cost, but with a housing crisis affecting every part of the state, facilitating affordable housing projects appealed to lawmakers. That means Spokane’s land bank could immediately start approaching agencies to get parcels of land.

But other changes to state and local rules may be necessary to address another possible source of affordable housing: zombie houses.

When homes have been vacated or abandoned, becoming nuisance properties that cities legally obtain, they typically get put on the market to go to the highest bidder. When Stuckart served as the Spokane City Council president, he frequently questioned why nonprofits couldn’t get the first crack at those properties.

There were occasions, he says, when the city would offer a particular home to an organization, but if it didn’t plan to build in that neighborhood within a few years, the property would be sold on the market instead.

“Across the country, more than 250 land banks have been created over the last decade.”

But with the land bank in place, the bank could take ownership of those homes and hold onto them until a nonprofit or developer is willing and ready to build a low-income residence there, Stuckart says.

If state and local laws are also changed to allow for those transfers to happen outside of the typical auction process, those properties could more easily be promised for affordable housing.

Across the country, more than 250 land banks have been created over the last decade, largely in response to the Great Recession’s housing crash, according to an August 2021 report on land banks solicited by Spokane Neighborhood Action Partners (SNAP) and Invest Health Spokane. The report, by the Center for Community Progress, outlines how several states changed their laws to specifically allow cities and regions to create land banks to put abandoned properties to good use.

“Most land banks focus on a subset of [vacant, abandoned and deteriorated] properties that are causing the most harm to a community by creating public health and safety hazards, driving down property values, and draining local tax dollars through repeated service calls for police, fire, and housing and building code enforcement resources,” the report states. “The targeted inventory of land banks are usually those properties that the private market has rejected given various legal and financial barriers, such as tax or other public liens against the property, that exceed the value of the property.”

Some states have enabled land banks to obtain those properties for less than the value of the tax burden remaining on that property.

Deals with Spokane’s land bank could also allow nonprofits to pay off a property over 20 or 30 years (rather than buying an entire property up front) depending on the type of loan or grant they get for their project, Stuckart says.

“It’s a lot cheaper and a lot less risk for the nonprofit,” Stuckart says. “Instead of them having to come up with that capital up front, they’d build that cost into their proposal.”

The newly launched land bank is still gathering support. Stuckart encourages anyone who wants to get involved with the board, which will decide who the land bank works with, or who wants to help with fundraising for land acquisition or is interested in selling or gifting their own property, to reach out to him. His email is [email protected].