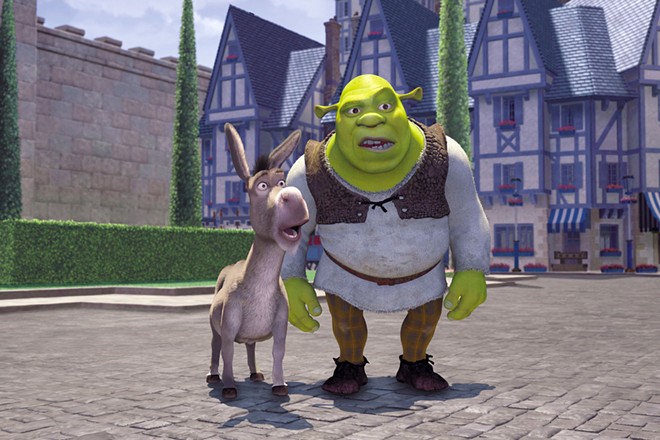 During the spring of 2022, the social media platform TikTok was besieged by a filter featuring Mike Myers’ computer-generated ogre Shrek in a skintight black latex bodysuit and high heels, dancing seductively. Users worldwide propped the graphic in front of cityscapes from the Pacific Northwest to the Far East. You’d be forgiven for not remembering this — Shrek memes come and go with a near-unprecedented rapidity (mere months earlier, “yassified Shrek in the sky” was also a trending TikTok filter).

There is something alchemical and uniquely special to the enduring popularity of 2001’s Shrek, both as a meme-able entity and as a beloved franchise. As John Lithgow (who plays Shrek‘s antagonist Lord Farquaad) put it in a recent video interview for GQ Magazine, “I [was] in something history-making, and I didn’t even know it.” Since that inaugural film, we’ve been served three sequels, one spinoff (Puss in Boots), two television specials, a host of video games, and Broadway’s Shrek the Musical (another spinoff sequel, Puss in Boots: The Last Wish, is set to release in December, and a full franchise reboot has been rumored).

When the aforementioned musical opened in Seattle, a Shrek flag was flown from the top of its iconic Space Needle. Limited edition “Shrek TVs” are a prized item online and regularly go for upwards of $400 on the resale market. A Shrek-themed rave in Brooklyn recently made national headlines. Shrek is that rare film that bridges the gap between generations, be they boomers, Gen X, millennials or Gen Z. It’s an object of both sincere admiration and ironic appreciation that appeals to all ages.

When Shrek first came out, I didn’t think much of it (it is, after all, designed not to be taken too seriously). In subsequent years, I embraced it as an easy vessel for lamebrained digital tomfoolery alongside fellow social media pranksters. But as time wore on, I came to appreciate the ways in which Shrek bucked tradition and forever changed the pop cultural landscape. It’s nearly impossible to imagine a world before it.

The secret of Shrek‘s success is its anarchic spirit. In the late ’90s, Jeffrey Katzenberg (the “K” of Dreamworks SKG) was smarting from a recent departure from Disney leadership. Katzenberg wanted to draw blood, and his first big animated family film was to be a veritable middle-finger rebuke of the Disney fairy tale formula he’d helped revive. Instead of a comely prince or princess, the movie would center on the crude, agitable ogre from William Stieg’s 1990 children’s book. Instead of a score of rousing musical numbers by Alan Menken, Randy Newman or Elton John, Shrek would be a jukebox musical featuring songs like “Escape” by Rupert Holmes, Joan Jett’s “Bad Reputation” and Smashmouth’s “All Star” (true heads know that the song, best cinematically remembered from Shrek, originally appeared on the soundtrack of the 1999 superhero spoof Mystery Men). The humor of Shrek would be pointedly crass, sometimes bordering on profane — territory Disney or Pixar would never dare go to (like when Shrek goes to rescue his companion Donkey and says, “I have to save my ass”). Shrek establishes itself as a different beast altogether from the outset: Like many a Disney animated classic, Shrek opens on an image of an olden-time storybook… then the titular ogre rips a page out of it and uses it as toilet paper. A few frames later, he is seen naked and bathing in mud.

While the then-cutting-edge CGI animation looks somewhat dated now, Shrek holds up surprisingly well (it helps that it’s a taut and ADD-friendly 90 minutes, a rarity these days). Myers — who is currently languishing in Netflix hell on The Pentaverate — remains endearing and hilarious in the title role (famously, he called an audible partway through voiceover recording and started anew with a hybrid Scottish/Canadian accent, which was obviously the right decision). Cameron Diaz (Princess Fiona), Eddie Murphy (Donkey) and the aforementioned Lithgow are likewise delightful.

But they’re only part of the magic stew that’s made Shrek such a cultural juggernaut for over two decades. While subsequent entries may exceed it in quality (2010’s underrated Shrek 4 is a multiverse story about labor disputes… seriously), the original Shrek is a sublimely subversive watch that doubles as family-friendly fare. It’s an impressive balancing act with serious staying power.

Shrek screens daily at noon Aug. 1-5 at the Garland Theater. Tickets are $2.50