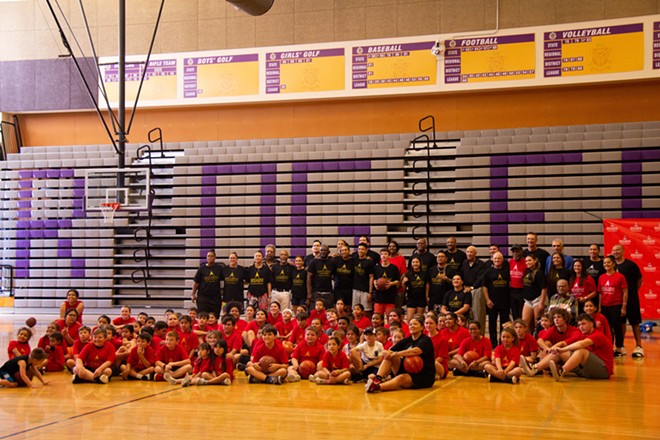 Over 100 kids registered for the Rise Above clinic, organized in part by Rise Above founder Jaci McCormack (seated in front). The clinic offered coaching sessions for basketball, volleyball, football and soccer.

“We care about you.”

In the gym at Rogers high school Monday, 100 kids in red T-shirts sit cross-legged at the center of basketball court. They listen, heads cocked, to Jaci McCormack, founder of the sports non-profit Rise Above. She points to the black T-shirts in the room, the adults and coaches who stand around the huddle of kids. It’s a star-studded staff — Olympic gold medalists, NBA all-stars, Division 1 athletes and a Hollywood actor. McCormack gestures to each one of them and reiterates, “We care about you.”

Rise Above exists to give attention to children who are too often overlooked. Rise Above uses sport to tell Indigenous youth that they are valuable, they are talented and they are capable of whatever success they set their minds to. Most of the kids who attend the Rise Above sports clinic aren’t elite athletes. But this isn’t a feeder clinic for high level competition — this is an afternoon spent nurturing future doctors, accountants, teachers, postal workers and community members to be the best they can be.

Native Americans have some of the highest rates of suicide in the nation, some of the highest dropout rates from high school and college, and a staggering amount of self-harm among young people. One hundred and seventeen children registered for the clinic. If national statistics are correct, McCormack says, about 35 of the kids sitting on the hardwood have thought about or actively harmed themselves. 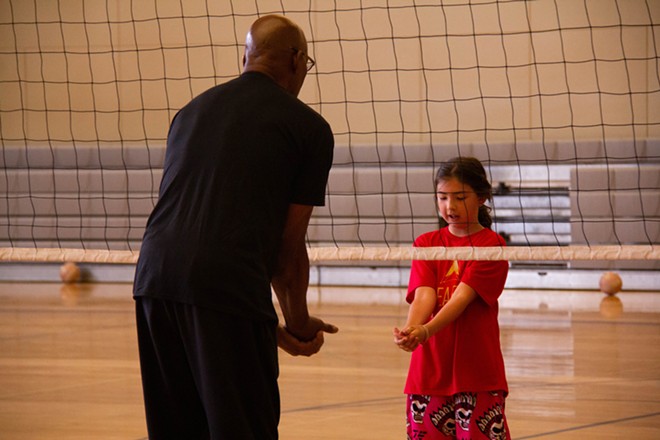 A Rise Above participant works on her volleyball basics with Dale Ellis, a former NBA All-Star and Three-Point Contest champion.

The coaches at the clinic came to Spokane to change that narrative. Former college basketball coach Mike Jarvis told the young athletes, “You are made in the image of God. You are all special.” Detlef Schrempf, a former Seattle SuperSonic and three time NBA all-star, described himself as an awkward, lanky youngster who didn’t fit in until he found basketball.

“Basketball changed my life,” Schrempf told the kids. “Find something you love and go for it.”

The chance that any of these student athletes will be an NBA player, much less an all-star or Hall of Famer, is small. But McCormack isn’t focused on professional athletes.

“Basketball is much bigger than the sport,” she says. “Sport is just the modality.”

Levi Horn, a former Chicago Bears player who grew up in Hillyard and attended Rogers High School, looks at the kids and says, “First and foremost, I love every single one of you.” Horn is the campus safety specialist at the high school where he spent his underclassmen years on the edge, teetering between athletic potential and the struggles of poverty and instability at home. Football coaches would call him every night to check in. He eventually made the commitment to pursue his dream of playing in the NFL.

“Those mentors saved my life. Football saved my life,” Horn says, echoing Schrempf’s sentiment. “Sports gives you goals. Don’t let anyone come at you. We’re proof that you can do anything you want to do.”

Actor Danny Glover sits with the participants and tells them to never give up on their dreams.

This aspirational, ambitious message overflows from McCormack’s own story, the bedrock of Rise Above.

McCormack grew up on the Nez Perce reservation, born into a family of athletes. Both she and her sister excelled in basketball. As a freshman, Jaci was named Idaho State player of the year. But when she was 14, a homicide rocked her small community and placed McCormack in the center of the chaos. She chose to tell investigators what she knew about the teenagers who killed their peer, though it meant intense social isolation. She eventually left the reservation, moving in with an aunt in Oregon and attending Lake Oswego High School, one of the wealthiest schools in Oregon.

The culture shock was intense. Students drove Mercedes and BMWs to school while McCormack took public transportation. McCormack wouldn’t share her struggles with her family on the reservation. Basketball was the foundation that grounded her and gave her a built-in friend group. It also taught her a skill she shunned before: asking for help.

The team and coaches were there for her, if she looked for them. “I learned to overcome that loneliness, to reach out for help academically and athletically,” McCormack says. With that support, her seasons flourished and she earned a basketball scholarship to Illinois State.

McCormack recognized the significance of a Native American woman playing Division 1 basketball immediately. As soon as she stepped on campus, she was already determined to raise up the next generation of Native youth to make and take opportunities themselves.

“It was very apparent to me that I needed to showcase what they could do,” McCormack says. She would excel as an athlete, complete her degree and be a new example of what was possible for kids on the reservation. Throughout her collegiate career, she dedicated herself to “find a way to give back.”

“I think that we’re put in positions to help others,” McCormack says. “If I can fulfill my aspirations, so can you.”

Venus Lacey, Olympic gold medalist with the 1996 American “Dream Team” basketball team that paved the way for the WNBA, coaches young hoopers during the basketball clinic.

McCormack and the other coaches emphasize having fun, even though they make students aware of the obstacles that threaten ambition.

“It’s hard to do the right thing,” McCormack says. “But you have to stand up, even if you’re standing alone.”

“There are no egos in Rise Above,” McCormack says. “We’ve all found each other organically through our desire to serve others.”

Glover’s production company, Louverture Films, is producing a movie about McCormack’s life. Telling McCormack’s story through mainstream media launches her message to an even broader audience, Native and non-Native alike. The crew will be predominantly Native. Proceeds from the film will support Rise Above, hopefully creating a sustainable business model that will propel the organization’s expansion. Partnerships with the University of Idaho and the Seattle City Council will build programs that incorporate education with sport. Rise Above also plans to build sport multiplexes in areas across Washington and Idaho that have few to no recreational resources.

“This is a story about my life journey,” McCormack says, “but it’s not about me.” Known for her stoic resilience, McCormick surprises the audience by tearing up when talking about the kids. She desperately wants to change the narrative that Native youth hear. She points to Emoni Bush and Freddy Brown III, two Native athletes now playing volleyball and basketball, respectively, at Division 1 schools. They are living proof of McCormack’s legacy and prominent examples of asking for help, building community, and dreaming big.

“Don’t let your environment dictate what you do,” McCormack tells the red T-shirts. “Look around the room. We care about you.”