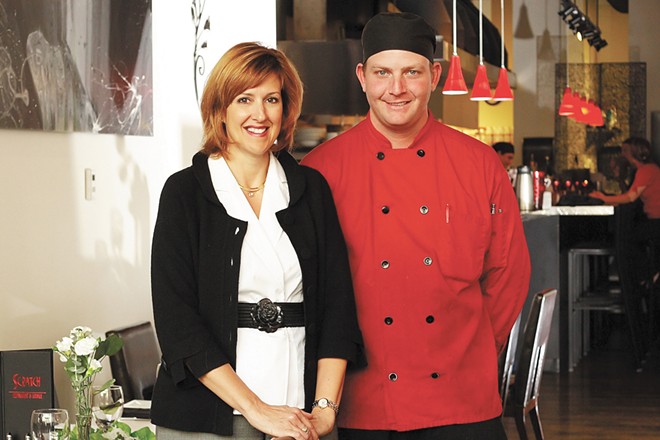 By all accounts, Spokane’s Connie Naccarato was a force to be reckoned with in the region’s restaurant scene.

When she passed away earlier this month, Naccarato had long since sold the restaurants she had helped create, including Mamma Mia’s, which she opened in 1984 with her parents, Gertrude and Joseph Naccarato. The Naccarato’s roots — like many with that distinct name — extend to Priest River, Idaho’s Italian Settlement.

Yet Naccarato’s presence is still felt, says Mari Bork, a longtime employee-turned-owner at Scratch restaurant in downtown Spokane, which Naccarato co-founded in 2007.

“Her pictures are still up,” says Bork, who worked for Naccarato at Scratch almost from the beginning.

In 2018, Bork, her husband Brad, and chef Silviano “Sil” Hernandez took over Scratch and the next door Rain Lounge, both located on the first floor of the Montvale Hotel building.

“We still use her recipes,” says Bork, whose admiration for Naccarato is both personal and professional.

“She was such a determined person,” she continues, noting that Naccarato didn’t let declining health — she fought colon cancer since 2010 — keep her from showing up for work and being fully present.

“The way she fought that disease is inspiring,” says Bork, adding that Naccarato’s leadership style was equally inspiring, even if it meant you got an earful when there was a problem.

“Connie had high standards, and you often weren’t going to live up to them,” Bork says, “but she made you feel like you could.”

Bork recalls how Naccarato’s mother would come in to make gnocchi. It wasn’t unusual for the two women to raise their voices at each other as the staff looked on, aghast. Just as quickly, however, they’d be covered in flour and laughing, Bork says.

Bork’s favorite memories of her mentor were from New Year’s Eve when Naccarato, who Bork describes as frugal, would splurge on a bottle of Cristal Champagne for the staff.

“I felt like family with Connie,” says Bork, her voice faltering. “And there’s not a single person who worked here who didn’t respect her.”

That goes for her longtime business partner, too.

Rex has since gone on to open several additional restaurants and food venues, all in North Idaho, but Scratch left the deepest mark on him.

“I miss the earliest days at Scratch, how at about 10 pm after a crazy dinner service we would sit down together with a drink and talk about the day,” Rex says. “Connie will be deeply missed.”