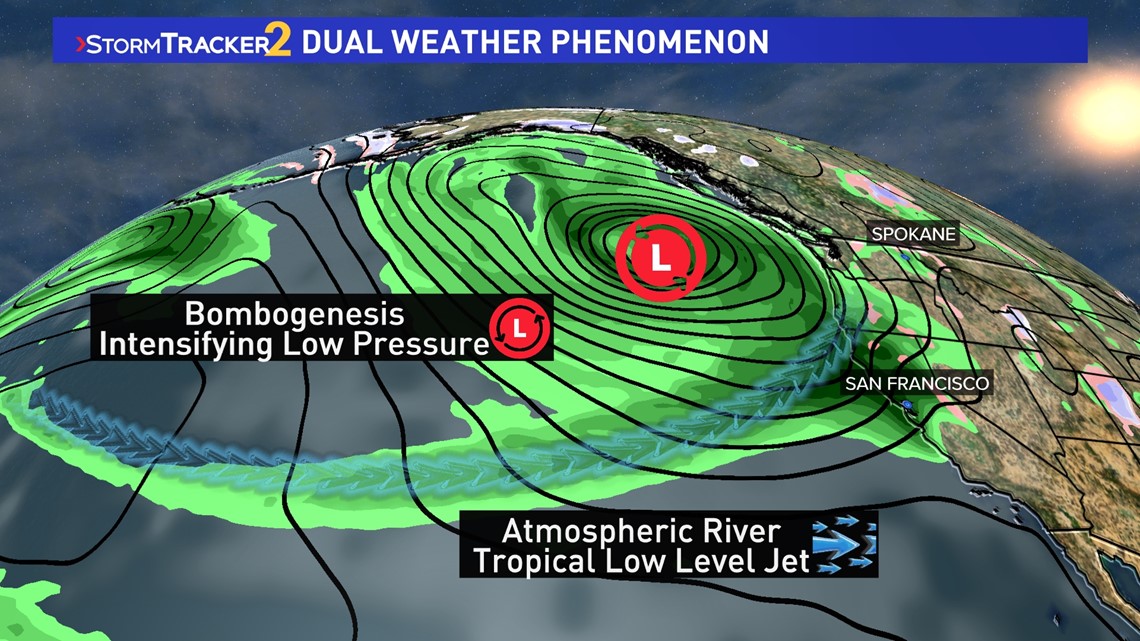 A strong, intensifying west coast storm system will combine with tropical moisture to drop several inches of rain across the entire western U.S.

SPOKANE, Wash. — The strongest storm system seen so far this Fall could be very strong across the western U.S. as a low pressure area rapidly intensifies into what’s known as a “Bomb Cyclone.”

The process the weather system will undergo is called “bomb cyclogenesis,” which is where the more common bomb cyclone term comes from. The definition of the bomb cyclone is that the center of low pressure drops in pressure by 24mb in a 24-hour timeframe (at 60°N latitude, the threshold drops the closer towards the equator the system is but this is mostly academic).

The storm system’s pressure is forecast to drop from 980mb to 944mb from Saturday to Sunday while still over the northern Pacific Ocean, via the GFS forecast model.

The GFS model has the low pressure dropping from 980mb to 944mb in 24 hours. This “Bomb Cyclone” will couple with an “Atmospheric River” to create a very strong west coast storm system which hits the states on Sunday. #KREMweather pic.twitter.com/odRw2pqKrT

This rapid intensification is most of the reason while this storm system will be so strong, but there’s another side that’s adding even more oomph. An atmospheric river, which is a low level jet stream that transport tropical moisture, is feeding moisture into the storm system from the south.

On Sunday, the bomb cyclone and atmospheric river will send heavy rain into northern California, where more than 5″ of rain is likely and the mountains could get as much as 8 feet of snow! Most of the western coasts of Oregon and Washington could see between 2-4″ of rainfall.

In Spokane and for the Inland Northwest, we’re a bit sheltered from the heaviest precipitation and wind. We’re forecasting about 1-2″ of rain for the area, with the most likely along the foothills of the North Idaho mountains. Spokane will likely get about 1″ of total rainfall over the next seven days combined.

Spokane is expecting rain most of the day Friday first, then this storm system starts to provide more rain starting Saturday evening and lasting until Tuesday of next week.