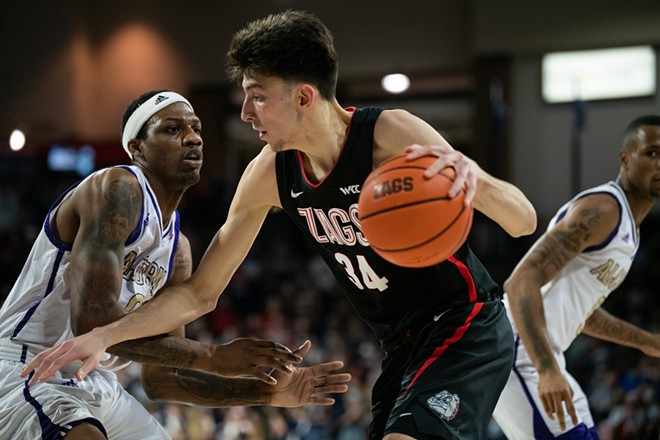 Chet Holmgren is further proof that “Zags got dudes.”

The Zags wrapped up the gantlet portion of their nonconference season over the weekend, which makes this as good a time as ever to check in on the team from a statistical perspective.

Gonzaga has played No. 5 Texas, No. 2 UCLA, No. 5 Duke, No. 16 Alabama and No. 25 Texas Tech, among others, but those five teams provided the real meat of the Zags’ schedule to date. Those are, for now, the only ranked opponents on the schedule. Those five games were the games by which Gonzaga would test itself, and the Zags went 3-2 against those five teams. Not perfect, but not bad. A winning record and a passing grade.

The Zags beat Texas, UCLA and Texas Tech in convincing fashion. They also lost to Duke in a close game and fell well short of Alabama.

That part of the season is over. There are no more high-profile opponents on the Zags’ schedule this season. This year’s conference slate is shaping up to be tougher than usual, maybe ever, but it won’t draw eyeballs like the nonconference schedule did. The conference could easily set a record and send four teams to the NCAA Tournament, but of those four the only one with reasonable national championship expectations is Gonzaga. If the Zags are to make it to the title game as they did last season, they’ll have to take down teams similar to the ones they’ve already faced. So, how have the Zags looked in their five biggest games of the season?

For as long as Mark Few has been at Gonzaga, the Zags have always been among the nation’s best offensive teams. Year in and year out, and this year is no different. Overall, the Zags rank as the second most efficient offense in college basketball, according to statistician Ken Pomeroy’s models. However, their offensive efficiency varies wildly depending on where on the floor the Zags are taking their shots.

On the season, the Zags rank as the top two-point percentage team in the country, having connected on 63.3 percent of their shots inside the arc. That’s just shy of last year’s mark of 63.9 percent, which set the record for highest two-point percentage by a team over a season in the history of college basketball. Which is to say, it’s very good. From three-point range, however, the Zags are simply average. By their own standards, though, they’re awful. They’ve made 34 percent of their threes this season, which ranks 163rd nationally out of 358 teams. If the season ended today, that would be the worst in Gonzaga program history.

The good news is the Zags shooting from deep has been better against the best teams they’ve faced. Over their five big games, the Zags made 44 out of 117 three-pointers (37.6%).

Gonzaga’s offense is, once again, among the most elite in the country… if the Zags aren’t turning the ball over left and right. Just over 18 percent of the team’s possessions this season have resulted in a turnover, their highest rate since the 2012 season. Against those five top-tier opponents, however, the Zags turned the ball over on just 16.4 percent of possessions. That might not seem like much of a difference, but it comes out to between one and two turnovers per game, which could easily be the deciding factor in a close contest.

While it’s good that Gonzaga seems to take better care of the ball against teams that have the more realistic shot of beating them, it’s still concerning that the Zags have been so careless with the ball overall. Many of their turnovers have been unforced errors like lazy passes. That said, the Zags have played a handful of bad teams, like Tarleton State and Merrimack, that don’t do much well besides generating turnovers. While there is plenty of reason for concern in this department, it doesn’t come anywhere near panic mode.

The phrase “Zags got dudes” has become incredibly popular among the fan base and with talking heads over recent seasons as a way to express, succinctly, the level of talent up and down Gonzaga’s roster. This year, as in years past, the Zags once again have dudes. That’s been evident across their big games.

Drew Timme is the face of the team, and he’s led the way in scoring in two of the five big games this season including a 37-point explosion against Texas. Andrew Nembhard, the senior point guard, has led the scoring in two of those games as well. Against Duke, it was Julian Strawther who took top honors. The Zags have had at least one player surpass 20 points in four of the five big games thus far.

Opposing teams can’t simply key in on one player and shut him down.

The balance isn’t just in who can lead the way on a given night, it is also shown in the number of players who can make significant contributions as well. Four players are averaging double-figures scoring this season, and seven have scored 15 or more in a game.

The No. 4 ranked Zags host Northern Arizona on Monday at 6 p.m. The game will be televised locally on KHQ and regionally on ROOT Sports. After that is a long layoff spanning the Christmas holiday, with the next game set for Tuesday, Dec. 28, against North Alabama.