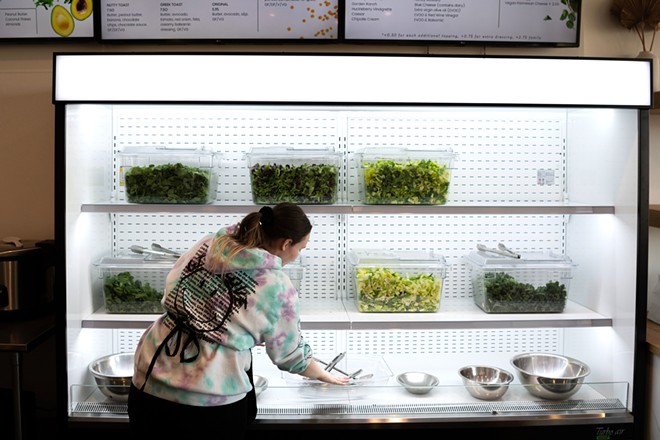 Salad is a focus at north Spokane’s new Fresh and Foraged.

Fresh and Foraged is a new eatery in north Spokane featuring vegetarian, vegan and gluten-free menu items that might make you realize you’re not missing the meat (although animal proteins are available as an add-on).

It’s also local entrepreneur Sarah Birnel’s latest business venture and a compelling story of how one woman turned over a new leaf, first with a chain of controversial coffee stands and more recently with Fresh and Foraged.

Birnel opened Fresh and Foraged with business partner Cara Deno in September 2021. Birnel brings the business acumen, while Deno runs the day-to-day operations, including creating some of the recipes.

“[Cara] makes this everything it is,” Birnel says.

The cafe is a cozy spot with white walls, a long wooden counter, and a few tables for dine-in that were styled by local firm Haven + Pine.

Deno and Birnel modeled their business after Crisp Salads in Portland, working with that local chain’s owner, Emma Dye, to bring parts of the restaurant concept to Spokane.

In addition to adding its own menu items, however, Fresh and Foraged tweaked some of Crisp Salads’ recipes. The restaurant renamed Crisp Salads’ NoPo salad to NoSpo (North Spokane versus North Portland) and made some ingredient substitutions, like almonds (instead of Oregon hazelnuts) and huckleberry dressing (instead of one with Oregon marionberry). Otherwise, the salad includes spinach, field greens, wild smoked salmon, cranberries and feta cheese.

Acai bowls are some of the most popular items on the menu, Deno says. The Berry Bliss ($13.95) features acai sorbet topped with bananas, strawberries, coconut flakes, chia seeds and honey drizzle.

Deno laughs when asked if she has much cooking experience.

“I didn’t start cooking until my late 30s,” says Deno, whose heart-health issues have meant being more conscientious about what she eats.

At age 24, Birnel opened her first coffee stand, shortly after being released from her second term in prison in 2006 after several felony convictions relating to theft and drug possession.

Realizing that getting hired by someone else was going to be more difficult than creating her own job, and being inspired by her father’s business background, Birnel set about building a successful chain of drive-through coffee shops.

In 2013, Birnel recognized the sweeping trend of so-called “bikini baristas,” or scantily clad female employees at drive-thru coffee stands. Resulting controversy over the workers’ lack of clothing was a mixed blessing, however, bringing more business and free publicity from local and national media outlets. Bikini barista stands also drew the ire of local community members, with some calling for city ordinances on where such businesses could be located.

Although today there are few remaining “bikini barista” stands in the Spokane area, Birnel still operates a handful of locations featuring servers in outfits ranging from pasties and thong underwear to lacy lingerie. Suggestive photos of the employees dominate the Facebook pages of these coffee stands, which Birnel is in the process of rebranding from Devil’s Brew to Black Sheep Coffee Company.

As a recovering drug addict who began using methamphetamine in her early teens, triggered in part by a family tragedy that sent one parent to prison and the other to the morgue, Birnel is matter-of-fact about her eyebrow-raising business model, but also her past mistakes.

“I never wanted anyone to find out [about my past] on their own,” Birnel says.

Birnel even detailed her journey with the July 2021 publication of Something Better Brewing: What I Learned from Prison, Parenthood and Pouring Coffee and has done book readings in small settings.

“Speaking publicly was uncomfortable,” says Birnel, also noting that writing the book and being candid about her life is the only way to move forward.

With Fresh and Foraged up-and-running and the coffee stand business percolating nicely, Birnel is looking for ways to share her story with a wider audience, including in local prison populations.