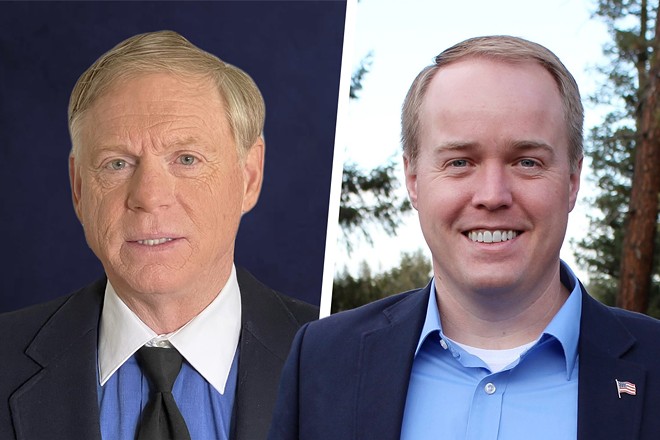 In that race, current County Commissioner Josh Kerns, first elected in 2016, faces an opponent who calls himself Wild Bill Schreiner.

Both will move through the top-two primary in August, which may give an indication of how many points Schreiner could have to make up against incumbent Kerns’ name recognition. Whoever wins in November will serve two years before facing election again in 2024, when the odd-numbered county districts will reset to a normal four-year election cycle.

Wild Bill, a.k.a. Albert Schreiner, says his nickname came from the side of a plane he used to fly for thrill-seeking skydivers. He recommends the experience, rebutting common fears by noting that “life is not terrifying at all!”

In his business ventures, the 60-year-old has done everything from laying underground utilities and building houses to aviation and odd public sector jobs.

Schreiner says he’s running in part because he felt the commissioners ran from his questions after his car was damaged and he started digging into why the county’s roads aren’t maintained as well as they should be.

“Why isn’t road maintenance taken care of here? What goes on with that?” Schreiner says.

Attending a commission meeting, Schreiner says he felt like the three commissioners simply agreed on the matters before them without asking questions.

He’s passionate about negotiating new contracts with unions that represent county workers and says he supports building a new county jail to operate as a “cash hotel,” where the nightly costs to hold inmates are charged to the jurisdictions that book each person. (Typically, jurisdictions are already charged nightly fees for the inmates they hold in jails.)

Schreiner says he doesn’t think the county can address the housing crisis much until state lawmakers make changes to the Growth Management Act. He also thinks homeless service providers misuse public money that would be better spent helping people relocate to family or other places if they don’t want to receive treatment here or pay to rent and maintain a camping space.

“The homeless … they put out an immense amount of energy to survive,” Schreiner says. “I honor them for their hardship. But if they don’t want that solution? Not a problem. We got a dartboard set up. Where do you want to go? Here’s the bus ticket.”

For those who want to stay here, he believes the county could help by leasing “surplus dirt” lots for managed encampments.

“I’m ready to rent some dirt,” Schreiner says. “I want the public not to have to pay taxes.”

With the shift from three commissioners who are elected by the entire county to five district-specific races, Kerns worries there may be a shift, with less incentive for individual commissioners to focus on countywide issues.

“You definitely run the risk of individuals becoming very, very focused on only their districts,” Kerns says, “maybe not giving as much thought to, how does an issue or how does a resolution or an ordinance impact the entire county as opposed to just their district?”

Specifically, with two new districts covering mostly the urban areas of the city of Spokane, Kerns says some commissioners will be spending most of their time voting on issues that impact very few of their own constituents, as the county’s focus is often on unincorporated areas, land use, parks, county law enforcement, etc.

In his time on the commission, Kerns says he’s proud to have helped develop the public development authorities for the West Plains and Northeast parts of the county.

“Two entities that are focused on economic development, bringing jobs to our region — I’m very proud to have been a part of both of those,” Kerns says.

He says he’s also proud of supporting 19 new deputy positions within the sheriff’s office, as well as efforts to make county operations more transparent, including making contract negotiations public and upgrading digital access to county commission meetings when the pandemic forced them to figure out digital options.

When it comes to housing issues, Kerns says he believes supply is the main issue, with a need for all levels of housing units. Labor has also been an issue, and he notes the county supports a training program that prepares inmates at Geiger Correctional Facility for jobs in construction once they’re released.

“Not only are we giving those folks a marketable skill, it’s had a fantastic, fantastic rate of reducing recidivism,” Kerns says. ♦