Michael Cathcart greets Rick Mead (left) along with Denise Rivera and Joseph Rivera, while doorbelling Saturday in the Hillyard neighborhood with his wife Vina Cathcart (right) and 13-month-old son Atlas.

In a four-way race to represent the eastern half of the city of Spokane on the County Board of Commissioners, three candidates are current or former Spokane City Council members, while the fourth is focused on achieving his longtime political goal.

The top two vote-getters will move through the August primary election to face off in the general election this November.

Current Spokane City Council member Michael Cathcart, one of two conservative voices on the largely progressive council, wants to see if voters would value his leadership at the county level. With the shift to five county commissioners selected only by constituents within each new district, Cathcart says he felt compelled to run for the good of his neighbors.

“Unfortunately, what that means is that effectively from here on out we’re going to have five fiefdoms,” Cathcart says. “And if you don’t have the strongest advocate possible, who can work with the majority of the county to get stuff done, your district is going to be left out.”

He thinks the county and city of Spokane can work together better to address public safety, homelessness, housing and infrastructure. He’d specifically like to see more deputies added to help cover the unincorporated parts of the county, and shared or joint jurisdiction agreements.

Cathcart also says the county can help lead discussions on how to address homelessness regionally.

“We’ve got to have that public discussion so that everybody’s coming to the table and there are expectations for what each community is going to do,” Cathcart says.

With road work, it’s possible to offer a bonus for finishing by a set date. Why not, he asks, incentivize goals for homeless service providers?

“If you’re able to exit a certain number of individuals from homelessness, get them housing, get them into the services they need, stabilize their lives,” Cathcart says, “we will come in and help.”

After serving for eight years as a progressive voice on the Spokane City Council, Amber Waldref spent the last few years helping connect community members with resources as director of The ZoNE initiative at the Northeast Community Center. She’s running to continue helping those in need.

“I was very interested in the opportunity to continue working on issues facing working families countywide,” Waldref says. “The county can play a much stronger role on targeted investments and solutions that reduce costs to working families, and expand economic opportunities and safety for all.”

Waldref says she is particularly proud of her work expanding public transit. She led a ballot initiative to expand transit options and helped get investment in the new City Line rapid transit route.

She sees a need for more housing of all types and says the county and city need to plan together better for developments where the jurisdictions meet.

Waldref says the county could also invest in child care, which is too large a burden for many.

“The county could play a role with these [American Rescue Plan Act] funds in bolstering the child care system here,” Waldref says. “I think we could get a lot of people who want to work back to work and into these jobs … we have a lot of openings right now.”

Retiree Bob Apple served on the Spokane City Council from 2003 to 2011 and has made multiple runs for higher office in recent years.

Apple says he wanted to run because there are issues with how the roads are maintained by the county and because he questions mandates that were put in place during the pandemic that didn’t go through the Legislature first.

He questions choices that are preventing growth in the housing market.

“The city has blocked water and sewer outside city limits,” Apple says. “They want growth, they say, and they want an area where growth will occur, but in some of those areas they’re now blocking essential service.”

The county has a duty to rectify that situation, he says. 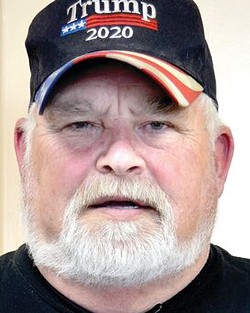 Glen Stockwell served in the Coast Guard and Air Force and says that, among many other jobs over the decades, he has long held a solid waste management contract.

If elected, Stockwell pledges to put $100,000 per year of his commissioner salary into a trust, to be split between Spokane Homeless Veterans and Spokane FFA should he fail to keep his promise to expand something like the Columbia Basin Project into Spokane County. Such a project could provide water to farmers and expand agriculture and economic opportunities in the area, he says.

After an altercation in which he allegedly assaulted Republican state Sen. Mark Schoesler last fall, Stockwell was convicted of a misdemeanor. He heavily promotes former President Donald Trump on his website, along with a mishmash of memes about the Illuminati, George Soros, Barack Obama and anti-Islamic sentiments. ♦