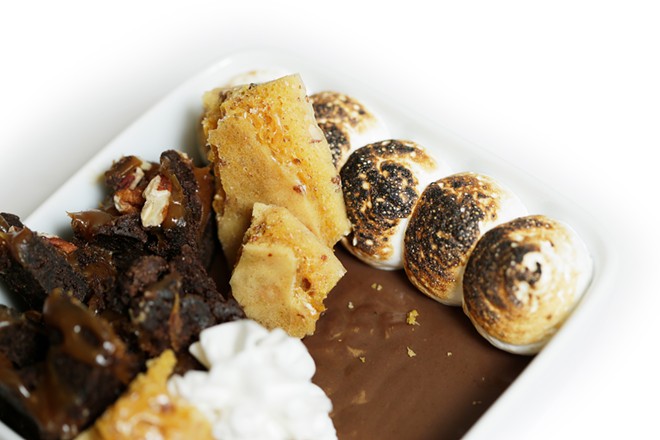 When the Inlander’s first Restaurant Week launched in 2013, it just included Spokane-area spots, but plans were already underway to include North Idaho restaurants the following year. Over the nine years since, Panhandle participants have come and gone — it’s the nature of the industry — as well as grown and thrived.

A look back reveals that many early adopters now form the core of the Idaho-based Inlander Restaurant Week experience, including several that have participated since the beginning.

This year’s event is number five for SWEET LOU’S RESTAURANT & TAP HOUSE as well as REPUBLIC KITCHEN + TAPHOUSE, the latter of which is showcasing a recent remodel as it welcomes diners.

It’s year six for ANTHONY’S AT COEUR D’ALENE, as well as the Coeur d’Alene Casino’s steakhouse, which first participated under a slightly different name. The restaurant underwent a rebrand in 2020 to become CHINOOK RESTAURANT CRAFTED BY CHEF ADAM HEGSTED to indicate the award-winning local chef’s culinary touches to the menu. Look for steaks during Restaurant Week at Chinook, of course, but also seafood including cured, wild-caught salmon and scallops fettuccine.

Also located inside Coeur d’Alene Casino, RED TAIL BAR & GRILL has participated in the event for seven years, showcasing its popular Tex-Mex-style pub food. This year, for those who can’t decide between a burger and tacos, Red Tail offers both with a taco-seasoned beef brisket patty topped with pepper jack cheese, guacamole, pico de gallo and tortilla strips.

Two additional participants celebrating the seven-year mark include WHITE HOUSE GRILL and 315 CUISINE, an eclectic dining destination housed in a historic, 113-year-old house with a cozy fireplace and wraparound deck.

315 Cuisine recently changed its name from 315 Martinis & Tapas when longtime owners Kris and Bob McIlvenna retired after more than 35 years in the business.

“The 315 loves to be a part of the community, and [Restaurant Week] presents a great opportunity to showcase new ideas to people who are passionate about food and drinks,” says 315 Cuisine manager and expert bartender Michael Irby.

Four of this year’s 22 participating Idaho restaurants have racked up an impressive eight years of Restaurant Week experience, including SATAY BISTRO, MACKENZIE RIVER PIZZA, and BARDENAY DISTILLERY and RESTAURANT.

SEASONS OF COEUR D’ALENE is another eight-year veteran, returning year after year for many reasons, including reaching new diners, according to general manager Daniel Bentley.

“We also love having the opportunity to create new dishes with seasonal ingredients,” says Bentley, who is also excited about chef Jesse Waldman, who joined the Coeur d’Alene eatery in 2021.

“Chef Jesse will be releasing a new menu for each season throughout the year, so we can be true to our name,” Bentley says.

Find a cozy spot near the fireplace or in the festive bar area at Seasons, and check out their Restaurant Week menu options, which range from decadent French onion soup to a hearty seasonal mushroom risotto to a house-made cheesecake with local huckleberry compote.

“As we have grown and evolved we now get to showcase menu items that are not on the regular menu, making it exciting and fresh for our staff and customers,” Puskash says.

New this year are classics from past menus and some of Thai Bamboo’s most popular dishes, according to executive chef Alex Santos-Cucalon. He’s excited to feature Thai chicken wings with a lime dipping sauce, as well as gluten-free coconut cheesecake for Restaurant Week.

See the full list of North Idaho-area restaurants participating in Restaurant Week 2022 below.