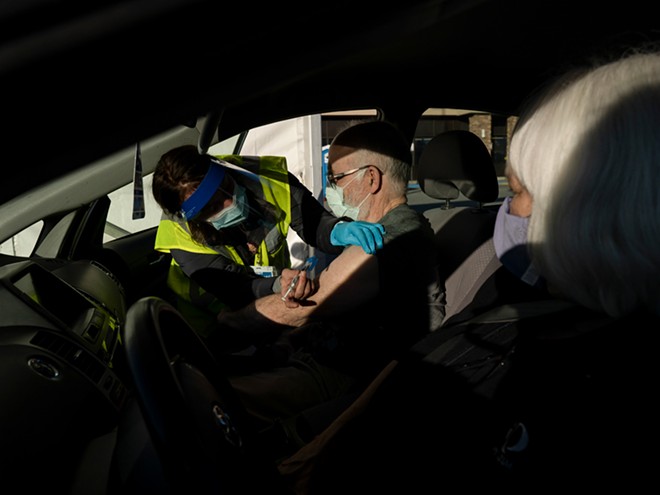 Administering a booster Covid-19 vaccine shot in the Northway Mall parking lot in Anchorage, Alaska, Oct. 24, 2021. So far, boosters aren’t getting to vulnerable people who need them most. The government’s muddled messaging is partly to blame, experts said.

Faced with rising infections and an anticipated surge in holiday travel, scientific advisers to the Centers for Disease Control and Prevention on Friday endorsed booster shots of the coronavirus vaccines for all Americans older than 18.

The move will fulfill President Joe Biden’s pledge in August to make the extra doses available to all adults, but it arrives after months of scientific debate over whether most people really needed boosters. The shots are already available at many drugstores, doctors offices and vaccination centers.

The CDC advisers said Americans older than 50, as well as those 18 and older living in long-term care facilities, “should” get booster shots of the Pfizer-BioNTech or Moderna vaccines. All other adults older than 18 “may” get booster doses, the panel decided.

Recipients of Johnson & Johnson’s one-dose vaccine already were cleared to get a booster at least two months after the initial shot.

Earlier Friday, the Food and Drug Administration authorized booster shots for all Americans older than 18. But the CDC usually sets the clinical guidelines adopted by the medical profession.

Many experts worried that extra doses were not needed by most adults to prevent serious illness and death, and that a push for boosters could constrain global vaccine supplies even as people in many poor countries have not received their first doses.

But infection rates are rising again in the United States and soaring in much of Europe. After recording more than 14,000 new infections Thursday, Austria will go into a nationwide lockdown Monday and impose a coronavirus vaccination mandate in February, the first such mandate in a Western democracy.

Health officials in many of these countries, and now in the United States, see booster shots as a way of shoring up defenses against a tenacious enemy and gaining the upper hand in the pandemic. France has mandated booster shots for those older than 65 who wish to get a health pass permitting access to public venues.

“Look what other countries are doing now about adopting a booster campaign virtually for everybody,” Dr. Anthony Fauci, the Biden administration’s top COVID adviser, said at a conference Tuesday. “I think if we do that, and we do it in earnest, I think by the spring, we can have pretty good control of this.”