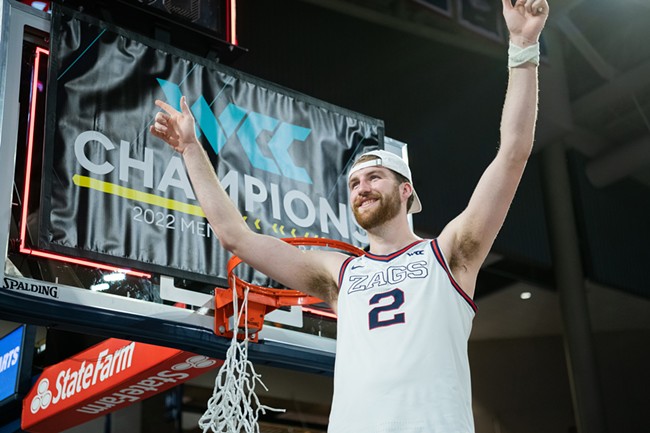 Drew Timme is a legend.

It was March 2020, and Gonzaga was beating up on Saint Mary’s in the West Coast Conference tournament. Drew Timme was just a freshman then, coming off the bench for the Zags, but legendary ESPN broadcaster Dick Vitale made an astute prediction about him.

“I think they are going to love him in Spokane because he’s going to be special,” Vitale said.

Two years, and two Best Athlete honors later, it’s safe to say Vitale was right. It was Timme’s spectacular play that prompted those words, and his play no doubt is part of why he’s so beloved around these parts. Last year as a sophomore, and again this season as a junior, the big man from Texas has been putting up monster numbers on the court.

Timme’s play, whether he’s putting defenders into the spin cycle or slamming home dunks with authority, is what’s helped him become the face of the Zags for the past two years. There’s more to Timme than just his game, though.

Around here, Timme is beloved because he’s Drew Timme. He’s just himself, on the court and off, all of the time.

He’s loved for the mustache, sometimes groomed into a majestic handlebar, that he incorporates into his signature celebrations. He’s loved for his game-day antics, like pulling Coach Mark Few out of his shell for a chest bump on the sideline, or the playful pregame bromance ritual he has with teammate Martynas Arlauskas. He’s loved because he plays basketball for what it is, a game to be enjoyed.

Though that’s not the only thing he enjoys about basketball. Asked earlier this season about his penchant for having big performances in big games, Timme gave a simple answer.

“I just enjoy kicking ass,” he said with a little shrug.