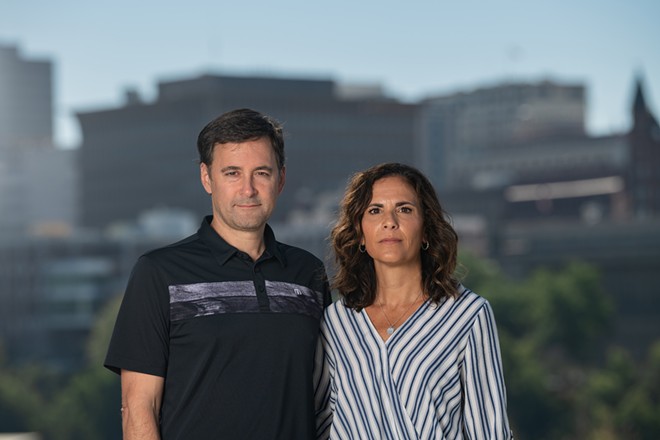 Mike and Kimber Erickson founded Kellen Cares in memory of their son.

In many ways, the Ericksons had gotten their son, Kellen, all the help they could.

After Kellen reached out to his parents, Kimber and Mike, during his junior year at Ferris High School to say he was struggling with depression and anxiety, they got him into therapy, and he was able to get medication. Things seemed to get somewhat back on track as his senior year started. He enjoyed his time in basketball and soccer, and he continued to enjoy the things he was known for, including his love of animals and hanging out with friends.

But after his final soccer game as a high schooler wrapped up, his parents say a bad depression and a sense of uncertainty about his future overwhelmed him.

While most seniors were wrapping up their milestone moments in spring 2019, gladly watching the last days of school tick off the calendar, Kellen Erickson was depressed, staying home for much of the last two weeks of school. He didn’t look at his phone or social media, and Kimber says she tried to get him out for walks or to do yoga, but that didn’t seem to help.

“He didn’t even go to his own graduation,” Kimber says.

He had trouble getting out of bed or off the couch, and he struggled to eat, losing a lot of weight in just weeks, they say.

“We tried to get him to rally for his grad party, which was combined with four or five of his friends, and just couldn’t get him to do it,” Mike says. “He just really was locked down.”

Kimber says they took Kellen to the emergency room multiple times throughout his struggles, including after the bout of depression around graduation, and he got into Providence’s RISE program, which offers intensive outpatient therapy for mental health. He seemed to improve with that program, and summer offered the chance to go to one of his favorite places, the Oregon Coast, where he loved to spend time with his parents and sisters, Lexi and Laney.

But even as the family decided that Kellen should stay at home that fall, deferring his first year at Washington State University in hopes his mental health would stabilize at home, he fell into a larger depression.

“One of the big problems that he had after he got better: All the kids went to college, all of his friends, and he was left here, and he started using marijuana a lot,” Kimber says. “One of the things that I’ve researched heavily is that if you have an anxious, depressed brain … it’s going to ramp up your anxiety.”

Kellen seemed to struggle more as he tried to stop self-medicating with the drug so much that winter, she says.

Like many whose loved ones struggle with suicidal thoughts and actions, Kimber and Mike struggled throughout that time as well. It felt hard to get their son everything he needed, even as they’d gotten him therapy, hospitalization and medication.

They say it felt very lonely going through that experience, as they’d sometimes get happy, oblivious group texts about sporting events and community news while they sat in the ER with their child who was telling them he didn’t want to live anymore.

Almost immediately after Kellen’s death, they knew they wanted to start a nonprofit in his name to help other people. They took some time and started to pull things together for Kellen Cares in late 2020. Over the course of 2021, they gathered a board of directors and got documentation in place, and by spring 2022 they hosted the first “Helping Boys Thrive” summit, which they plan to make an annual event. Boys and men die by suicide at far higher rates than girls and women.

Through Kellen Cares, the couple hopes to help parents whose kids are dealing with the same types of struggles, as well as offer resources and prevention services to youths.

In the longer term, they hope to do everything from funding brain research to offering scholarships for people interested in entering the psychology field, as there’s a shortage of mental health professionals and health care workers. Many families struggle to get their loved one into therapy as waiting lists can be months long.

GET INVOLVED!
KellenCares.org offers a list of resources, educational material and ways to lend a helping hand. The Suicide and Crisis Lifeline can now be reached 24/7 by simply dialing 988. Locally, Frontier Behavioral Health’s 24/7 crisis hotline is 1-877-266-1818.

They also hope to start support groups for parents whose kids are going through similar mental health issues. They’re close to getting one together currently, but they need a therapist to volunteer to facilitate the group.

“Financially, donations are always welcome,” Kimber says. “We’d like to donate to organizations that are making a difference. I mean, we don’t necessarily have to reinvent the wheel, but we’re looking all the time to see who’s actually doing things that are good.”

One resource they’d like to copy is a safe haven house they learned about on the East Coast that serves as a drop-in space for youth to find mentoring from peers and professionals they feel comfortable with. Ultimately, starting something like that in Spokane would be great, they say.

In the meantime, for those helping someone with similar mental health issues, they encourage people to continue advocating for their loved one, and remember that self care is key. To help others, you need to stay healthy as well.

“Don’t give up. Stay in the fight with your kid, whether your kid knows it or not, because it’s definitely a fight,” Mike says.

“Reach out to other people, reach out to us,” Kimber says. “We’re not psychologists or therapists or anything, but we’re happy to talk to them. And keep looking, keep researching.” ♦