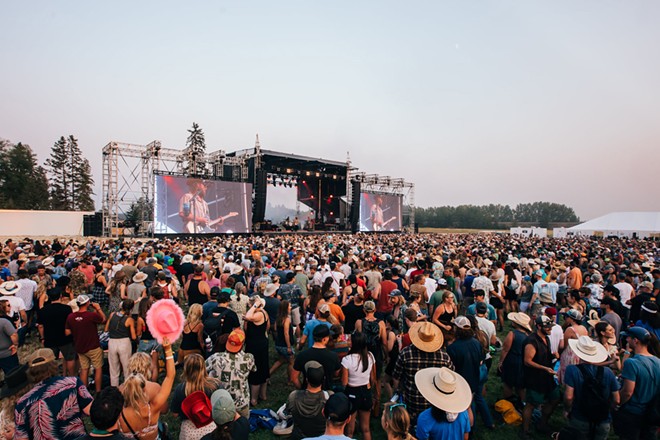 Crowds gather in Whitefish for Under the Big Sky Festival.

Filer, Challis, Joseph, George, Canby and Colville — even Whitefish in Montana for that matter — are far from booming metropolises in the Pacific Northwest.

But for a few days every summer, they are destinations for bands and music lovers alike. They become boomtowns filled with all genres of music, including red dirt country, Southern rock, bluegrass and all points in between pop, rock, country and Americana. All are in the great outdoors, most of the time under hot, sunny skies during the highly anticipated long, long days of summer.

Already the festival season locally has gotten off to a fast start. The first-ever LuckyFest Northwest in Spokane took place in May and was a smashing success. And in March there was Treefort, where more than 500 bands performed in Boise, Idaho. But returning to those will have to wait until 2023.

While Sasquatch Festival at the Gorge went away after 2018, fans who miss former Gorge mainstay Paradiso can catch the new EDM festival at the Gorge called BEYOND WONDERLAND (June 18-19), which began in 2021 and will get the summer season fully underway in 2022. There is also a rolling array of options within driving distance of Spokane on the festival circuit.

Among the most unique of festivals is HIGHWAY 30 (June 22-25) in Filer, Idaho, a few miles from Twin Falls along the Snake River Canyon. Army veteran Gordy Schroeder and his wife, Megan, started the festival in 2014, and it’s only gotten stronger each year. With a focus on Texas country music, it’s a four-day mix of under-the-radar bands with a smattering of music stars you hear on country radio.

Highway 30 was among the few festivals to actually take place in 2020, the first year of the pandemic when most everything else was shut down, so 2022 will be their ninth consecutive year. Among its features you most likely won’t find anywhere else:

In the months leading up to the event, Gordy can be seen each Sunday morning giving live reports from his hot tub. He makes most of their festival lineup announcements this way.

Each year, Gordy honors military members, veterans, first responders and other public servants by giving them a commemorative medallion from the event.

Oh yeah, the music is pretty darn impressive, too. The 2022 version includes recently reunited Turnpike Troubadours, plus Granger Smith (with his alter ego Earl Dibbles Jr.), Aaron Lewis, Koe Wetzel and more. Some of them — including Wetzel, Sam Riggs, Ray Wylie Hubbard, the Steel Woods, and Shane Smith & The Saints — are yearly fixtures at the festival.

Other festivals have found their own niches, too, and won’t be going away anytime soon. Just a few hours away from Spokane in Whitefish, Montana, is the UNDER THE BIG SKY FESTIVAL (July 15-17), which has caught on like wildfire.

In its 2019 debut, the mix of Americana, folk and country music for two days drew more than 15,000 people to the picturesque two stages on the doorstep of Glacier National Park. After a pandemic delay, it returned in 2021 and burst at the seams in terms of lines for restrooms, water and concessions.

For 2022, tickets sold out in a matter of days, despite incredibly expensive lodging costs for those who attend. But its lineup — this year featuring Lord Huron, Cody Jinks, Black Pumas and Jamey Johnson — is one to drool over.

Another family-oriented festival, founded in 1979, takes place each August in the outpost of Challis, Idaho. Simply known by most as BBR, the BRAUN BROTHERS REUNION (Aug 11-13) features a pair of brothers from the annual Saturday headliner, Reckless Kelly, and another set from the Friday headliner, Micky and the Motorcars.

All four brothers grew up near Challis, and their father, Muzzie, had his own successful music career, including founding the festival with his brothers. In fact, Muzzie and his friends and family also have an early set to themselves at BBR, and Muzzie can be seen in the early hours golfing at the Challis Golf Course where the festival takes place.

Willy Braun could be considered the superstar of the family, as Reckless Kelly has a cult following. Seeing Willy on the drums for other performers is a common sight, and there is a steady dose of that kind of camaraderie throughout the festival as sets continually merge into sing-alongs and play-alongs among the performers.

If you’re a night owl, you can see BBR performers at the Roadhouse, one of three downtown hotspots that provide live music for the after-party. Campgrounds are also full of music and frolic of all kinds. And since the daily music starts in the midafternoon, you can always sleep in deep into the mornings.

FARM JAM (Sept 2-3) in Colville is also worthy of a visit, although Labor Day Weekend is always a tough sell for the lake-going crowd. But it takes place on the working family farm of Greg and Zara Knight, so of course earlier dates would be out of the question.

This year’s festival features Matt Stell and Joe Nichols, and a collection of other local, regional and national country talent. With plenty of space on the farm for camping and in just its third year of existence (2019 and 2021), this festival certainly has room to grow. Located in the massive valley that Colville sits in, there are gorgeous views far and wide.

There is no denying that full days of wall-to-wall music and the parties that go with them are what music fans are clamoring for. And the Great PNW — although far from music meccas such as Nashville and Austin — does not disappoint. ♦