Here’s a big idea: What if every child in the Inland Northwest had access to scholarships to pursue secondary education? What if every child could find a high-paying job, contribute to the local economy and ensure economic prosperity for Eastern Washington and North Idaho?

It’s an ambitious plan, but Ben Small, executive director of LaunchNW, says the region has what it takes.

“Here in Spokane County, we do big things,” Small says.

LaunchNW is a new initiative incubated by Innovia, a Spokane-based nonprofit community foundation. The program launched in May. Leaders have spent recent months gathering data and local input to lay the groundwork for the plan, which aims to raise $150 million to provide scholarships for college and vocational training for every motivated kid in the Inland Northwest. They’re calling it the “Promise Scholarship,” and the goal is to debut in Kootenai and Spokane counties starting with the class of 2024.

To make those scholarships effective, LaunchNW also aims to provide wraparound services to prepare children still in the K-12 system for a post-high school education. With the Promise Scholarships as incentive, it hopes to integrate various community organizations and resources to make sure students and families have access to a range of supports.

LaunchNW is still in the funding and implementation phase. Its team has spent this summer holding a series of town halls to bring community members together, share information and discuss barriers facing children.

You can’t solve a problem until you understand it, Small explains.

At an Aug. 17 town hall, LaunchNW hosted about 40 people in the auditorium at North Central High School. It was a “who’s who” of the Spokane nonprofit world. Catholic Charities, the Spokane NAACP, the League of Education Voters, Spokane County United Way and others had at least one member in attendance.

“Our theory of action is that children need to have the barriers broken down for them to figure out what they want to do post-high school,” Small says to the gathered crowd.

Spokane has fairly good high school graduation rates, Small notes, but the number of kids seeking post-high school education is still low — 60 percent of students don’t complete a postsecondary program. That lack of higher education has a significant impact on income as an adult: Fourteen years after graduating from Spokane County schools, the average student has a median income of $30,000, Smalls said. That’s a lot lower than other parts of the state. There’s also a significant gap for disadvantaged students when it comes to college preparatory coursework and AP classes.

Aaron McMurray, Innovia’s chief strategy officer, tells the Inlander that in today’s world, a high school degree isn’t as likely to land you a job with a stable, livable wage. When more young people pursue secondary education and land stable jobs, it can have a ripple effect and help address generational poverty and other challenges facing the community, McMurray says.

Raising the money to send kids to post-secondary school is one thing, but actually making sure those kids have the tools and desire to pursue that opportunity? That’s where the real challenge starts. 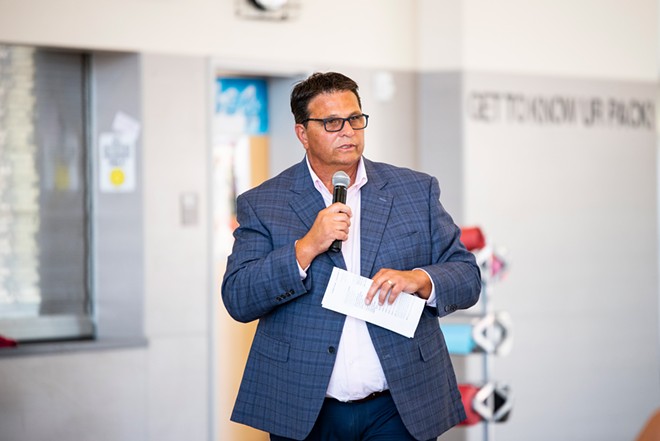 After a brief presentation, Small invites attendees to break off into groups and walk around the room to take a closer look at posters with some of the data LaunchNW has gathered.

In addition to quantitative data on things like demographics, student achievement and post-secondary outcomes, LaunchNW has also gathered qualitative data by conducting focus group interviews with community stakeholders. Over a period of about six months, LaunchNW collaborated with Community Catalyst Partners and the Center for Research and Reform in Education at Johns Hopkins University to interview hundreds of people in focus groups composed of business leaders, parents, faith leaders, communities of color and — most important — the students themselves.

McMurray says he was especially surprised to see how many students reported concerns about microaggressions, racism and an overall sense of negativity relating to the political climate. The country is in a deeply polarized place, McMurray says, and young people can feel it.

On one poster, LaunchNW displayed quotes echoing the most common sentiments from focus group interviews with students:

“There’s no way to know how to deal with stress and anxiety.”

“We have so many great things to say, and we want to see the public schools recognize our voice.”

“Schools have lost their ability to be a safe place for opinions.”

“There is so much happening in the world that is not being discussed in schools. In order to have an opinion about something, we need to learn about it.”

McMurray says many young people also expressed a desire to leave Spokane once they graduate.

“If our diverse young people are leaving Spokane because of trauma and woundedness and saying, ‘I don’t want to go back to Eastern Washington or North Idaho’ — that’s a problem,” he says.

After attendees examine the data themselves, they regroup to share reactions and discuss solutions. Small admits that LaunchNW doesn’t have all the answers, that’s why they’re holding these town halls and inviting community partners to share ideas that relate to their own experiences.

Several attendees express surprise at the high rate of poverty many students experience. In nearly half of local school districts, the number of students living in poverty meets or exceeds 51 percent. Others say they’re surprised to see that academic achievement rates are 10 to 15 points lower than before the pandemic.

GET INVOLVED!
Learn more about LaunchNW at launchnw.org. The group will announce dates for more community town halls in Cheney, Airway Heights and Medical Lake in coming weeks.

Attendees propose a number of solutions, including more job shadow opportunities with the business community, an increased focus on English language education and more work to help families fill out the Free Application for Federal Student Aid (FAFSA).

That last idea is already on LaunchNW’s agenda. In coming weeks, Small says people can expect to see a media campaign around FAFSA completion and a career pathway awareness campaign.

LaunchNW has a momentous task ahead, but Small says he’s not intimidated. He points to Spokane’s hosting of Expo ’74 as an example of the Inland Northwest community coming together to do something once thought impossible.

“I think the biggest challenge is getting people to understand that it’s doable,” Small says. ♦